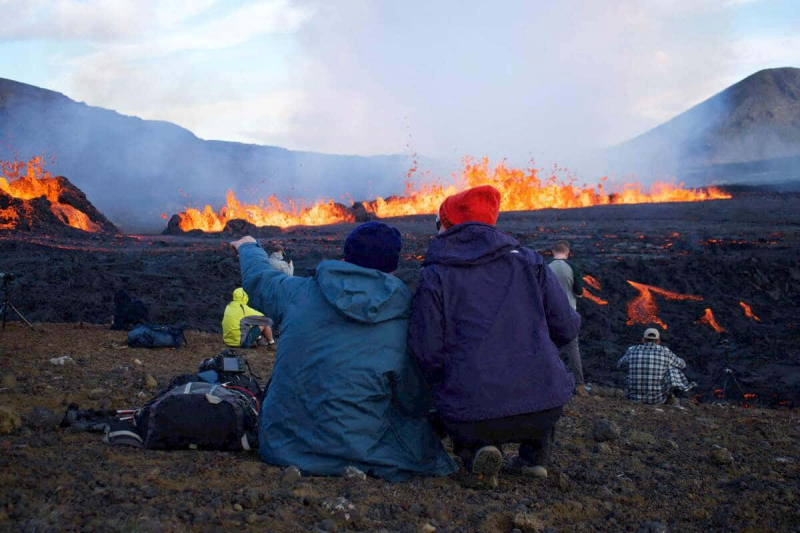 Onlookers flocked Thursday to the site of a new eruption in a volcanic fissure located in an uninhabited valley about 40 km from Reykjavik, the capital of Iceland.

The eruption, which began on Wednesday, is located nearly a kilometer from the Mount Fagradalsfjall volcano in southwest Iceland, which had been erupting for six months last year .

The eruption site, in a hard-to-reach area that requires a 90-minute walk, has already attracted more than 1,830 visitors on the first day the fissure appeared, according to Icelandic authorities.

< p>Among the visitors was Heather Hoff, an American tourist who waited years to see lava and for whom it was “a goal in life”.

“I had to sit and cry a little bit because it's so beautiful, so moving and it's like the raw power of our planet,” she told AFP.

“It's gigantic. I like. I also liked last year's blowout, especially at the start. But this one is special with the lava and the huge fountains gushing out in the middle,” replies Anita Sauckel, a German living in Iceland.

Authorities had called on the public on Wednesday not to go to the site before a risk assessment was carried out. But on Thursday, Civil Protection said only young children should stay out of the eruption area.

The gases emanating from volcanic eruptions, including sulfur dioxide, can be dangerous or even fatal .

Last year, the site of the eruption, easily accessible on foot, had attracted more than 435,000 tourists.

Wednesday's eruption was preceded by intense seismic activity, with nearly 10,000 tremors recorded since Saturday, including two of magnitude greater than 5.

The Meteorological Institute of Iceland estimated the length of the fissure at 360 meters on Thursday, with lava jets reaching around 10 to 15 meters.

The lava flow in the early hours of the eruption was estimated at 32 cubic meters per second, according to measurements made Wednesday by scientists from the Institute of Earth Sciences, three and a half hours after the start of the eruption.

That's about four or five times more than at the start of the 2021 eruption.

“The current eruption is therefore much more powerful,” the institute said on Facebook.

According to the Institute of Earth Sciences, lava from the new eruption covered an area of ​​approximately 74,000 square meters.

Mount Fagradalsfjall belongs to the Krysuvik volcanic system, located on the Reykjanes peninsula in southern Iceland.

Before last year, the Reykjanes peninsula had not been the scene of eruptions for nearly eight centuries, but Icelandic specialists point out that the region has entered a new period of volcanic activity.

Iceland has 32 volcanic systems currently considered active, the most in Europe.

The country, which experiences an eruption every five years on average, straddles the Mid-Atlantic Ridge, a fissure separating the Eurasian tectonic plate and North America.

The movement of these plates is partly responsible for the intense seismic activity of the country.