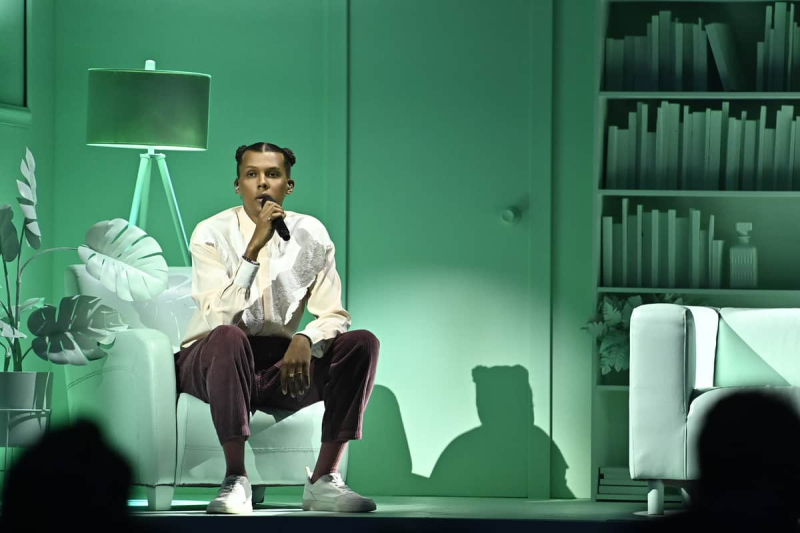 In September 2015, his two concerts at the Bell Center drew thousands of people. After a long break, the Belgian Stromae is finally coming back to see us for a total of five shows in Quebec by mid-December. What should we know about the 37-year-old artist? Le Journal presents seven facts.

Stromae and his wife Coralie Barbier

Born Paul Van Haver, the songwriter decided to take the name Stromae simply, because it's the word “maestro” in verlan. His name is thus pronounced “Stromaye” and not “Stromaé”. Still in the field of letters, the musician created his production company, which is called Mosaert (the anagram of Stromae). This company brings together the label, publishing, music videos, management and social networks of the artist. Mosaert is also the name of the unisex clothing line that the singer created with his stylist wife, Coralie Barbier. The two have been married since December 2015.

It was on March 12, 1985, in Etterbeek, one of the bilingual municipalities of the Brussels-Capital Region, in Belgium, that Stromae was born. Paul Van Haver also has Rwandan origins on his father's side. In recent years, the singer has been part of a renewal movement on the Belgian music scene. Other artists from his country to stand out lately include Angèle, Roméo Elvis and Damso.

In 2009, Stromae is still a young, little-known artist. But he will not remain anonymous for long since he launches the song Alors on danse, which becomes a planetary megahit. The title will be found on the singer's first album, Cheese, released in June 2010. Alors on danserose to the top of the charts in several countries, including France, Belgium, Switzerland and Germany. Kanye West did a remix of it the same summer.

Stromae will quickly be in demand around the world. For their show at the Stade de France, in 2010, the Black Eyed Peas asked the Belgian to do the first part. Coldplay also invites the singer to collaborate on the piece Arabesque, which is on the album Everyday Life, released in 2019. Stromae will also sing with them in Jordan .

At the end of 2015, Stromae retired from the spotlight. The singer then announces that he is thinking of retiring. He later clarified that he experienced serious health problems after reacting badly to medical treatment. “It gave me hallucinations. I thought I had gone mad, I was diagnosed with psychic decompensation,” he said. His overexposure to the media and a grueling world tour had also exhausted him.

Even if he stayed away from the boards, from 2015 to 2022, Stromae did not remain inactive at all. With his Mosaert label, he has produced other artists such as Orelsan, Vitaa and Disiz La Peste. With his brother Luc Junior Tam, he has also worked as director or artistic director on music videos for Yael Naim, Major Lazer, Dua Lipa and Billie Eilish.

Last March, Stromae released their long-awaited third career album, Multitude. Within a week on the market, the album had already obtained gold certification in Europe (more than 50,000 copies sold). On the record, the singer returned to his dark episodes of recent years. The album received generally very positive reviews. This winter, a few weeks after announcing concerts for the end of November in Quebec, Stromae made a remarkable appearance at Star Académie. This week, the singer will have played two evenings at Madison Square Garden. He will head to Montreal on Friday where he is scheduled to play at the Bell Center on November 25, 26 and 27, as well as December 14. A stop in Quebec is also planned, on December 11 at the Videotron Center. The South African rapper and poet Sho Madjozi will be in charge of the first parts.

Do you have a scoop to pass on to us?