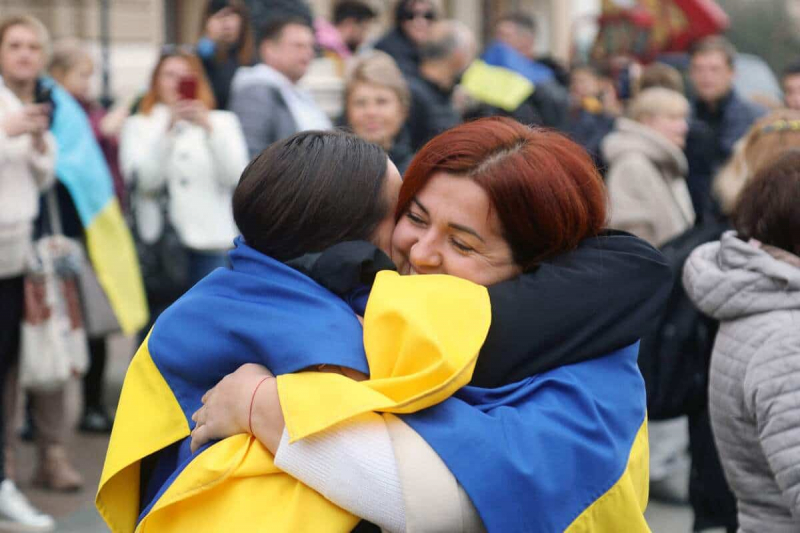 In the aftermath of Kyiv's recapture of Kherson, it was time for minesweeping, infrastructure repairs and documentation of “crimes” attributable to Moscow in the major southern city, including the loss constitutes a major setback for the Kremlin.

For Kyiv, the West is on the road to a “joint victory” over Russia after the reconquest of Kherson, where the he Ukrainian national anthem sounded on Friday after the withdrawal of Russian troops.

Kherson, annexed by Moscow at the end of September, had been the first major city to fall after the Russian invasion launched at the end of February.

On images released by the armed forces of Kyiv, Ukrainians dance in a circle, around a fire, to the rhythm of “Chervona Kalyna”, a patriotic song.

Outside Kherson, in the village of Pravdyne, returning residents hug their neighbors. Some can't hold back their tears.

“Victory at last!” Svitlana Galak told AFP. “Thank you, my God, we are finally liberated and now everything will find its place”, continues this 43-year-old woman who lost her eldest son in battle.

“We are all overjoyed,” Ukrainian President Volodymyr Zelensky said on Saturday, who also reported significant destruction in the region.

According to him, the Ukrainian armed forces have regained control of nearly 60 localities in the Kherson region.

After eight months of occupation by Russian forces, national television programs are again visible in Kherson. And the region's energy supplier said it was working to restore electricity supplies.

Some 200 police have also been deployed to Kherson to erect roadblocks and document “the crimes of Russian occupiers,” National Police Chief Igor Klymenko said in a statement.

He also warned townspeople on the presence of explosive devices left behind by Russian forces, calling on them to “move with caution”. According to Klymenko, a policeman was injured during a mine clearance operation in a building in Kherson.

A woman and two children were injured in an explosion near their car in the village of Mylove, Kherson region, according to police, who also reported Russian shelling on Berislav district.

'On the right track'

“Only together can we prevail and drive Russia out of Ukraine. We are on the right track,” Ukrainian Foreign Minister Dmytro Kuleba said on Saturday during a meeting with US Secretary of State Antony Blinken on the sidelines of a Southeast Asia summit in Phnom. Penh.

“Our victory will be our common victory,” he continued.

The Russian withdrawal from Kherson marks “a new strategic failure” on the part of Moscow, British Defense Minister Ben Wallace said in a statement on Saturday.

National Security Advisor Jake Sullivan of US President Joe Biden called the recapture of the city by the Kyiv Army an “extraordinary” “quite remarkable” victory.

This Russian withdrawal is the third in magnitude since the beginning of the invasion on February 24, Russia having had to give up in the spring to take Kyiv in the face of fierce resistance from the Ukrainians, before being driven out of almost all of the Kharkiv region (north-east) in September.

Friday evening, on the emblematic Maidan square in Kyiv, residents of Kherson who had been refugees for months in the capital celebrated the news with jubilation.< /p>

“Finally my free city, the one where I was born, where I lived all my life,” said Nastia Stepenska with tears in her eyes, the national colors painted on her cheeks. “When they (the Russians) arrived, it was horrifying, we didn't know what would happen the next day, if we would stay alive”, testifies the 17-year-old schoolgirl, who says to herself “in a state of shock”.

Earlier on Friday, the Russian Ministry of Defense announced that it had completed the “redeployment” of its units from the right (western) bank of the Dnieper, on which Kherson is located, to the left bank, ensuring that it had not suffered any losses or abandoned military equipment.

According to Moscow, “more than 30,000” Russian soldiers and “nearly 5,000 units of armaments and military vehicles have been withdrawn” from the western bank of the Dnieper.

However, this withdrawal was all a snub, Russian President Vladimir Putin having claimed at the end of September the annexation of four Ukrainian regions, including that of Kherson.

On Saturday, President Putin spoke with his Iranian counterpart Ebrahim Raisi, at a time when Tehran appears to be a major ally of Moscow in its intervention in Ukraine.

The two leaders placed “emphasis on an intensification of cooperation in the political, economic and commercial fields,” the Kremlin said.

“For reasons that are obvious to all reasonable people, Russia has not yet made use of its full arsenal of possible means of destruction,” he wrote on Telegram, specifying: “there is a time for everything”.