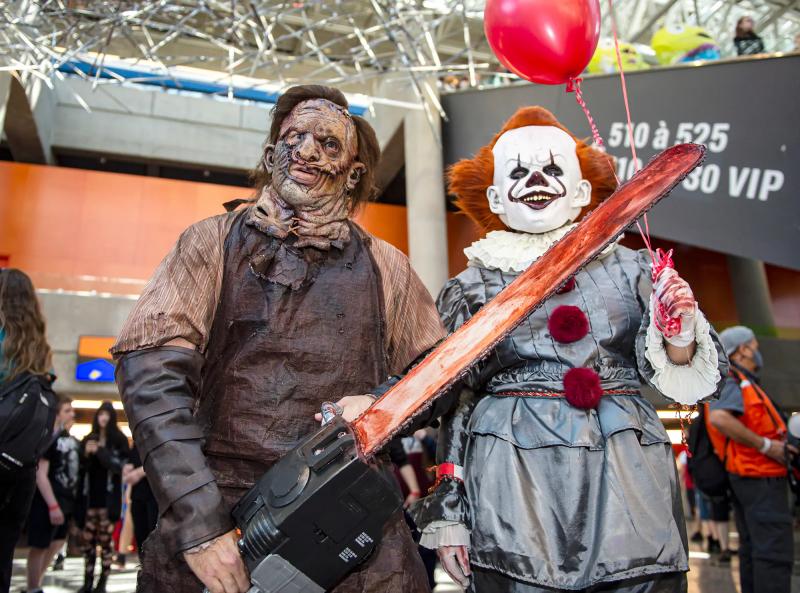 The Spider-Man, costumes from Star Wars or Transformers were all over downtown Montreal on Saturday. After going three years without their favorite event, thousands of cosplayers and geeks em>took over Montreal Comiccon 2022, a festival taking place at the Palais des Congrès this weekend.

Charles Martinet, known for being the voice of Mario and several other characters in Nintendo's cult video game, was very happy to be in Montreal to meet his fans yesterday. “I love Montreal! The people are great and the Super Mario fansare absolutely great. I feel at home here! » he says in impeccable French. Hearing him say a few words in Mario's voice is enough to instantly revert to his youth. “People say to me 'You are the voice of my childhood'. I'm told that by people from 5 years old to 55 years old. It touches my heart very very deeply. »

Two Quebecers (back -plan on the right), interviewed by Le Journal, entertained young and old with their impressive replicas of the droids from the Star Wars films.“When you watch the movies, you see the droids and you're like, 'Seems like I'd like to have that,'” explains Stephane Beaulieu as he moves a droid with his remote control. With his partner, Jonathan Dumoulin, he spent years designing his droids and demonstrating them all over North America. “Interactions with children are so much fun!” he said. Stéphane and Jonathan have a background in computer science and robotics, respectively, but their project mostly requires willpower and resourcefulness, they say.

Noémie Bouchard, dressed as the Mad Hatter from the movie Alice in Wonderlandcame to Comiccon with her little sister Laurence and her friend Isa. “ I like costumes with a lot of detail, explains Noémie. It cost me an easy $260. Since the beginning of the year, I've been working on it between work and school.” Nine-year-old Laurence said she was impressed with the costumes she saw this year. “I like to come here to have fun and to show off my costume. I like to dress up. »

MANY STARS ON LOCATION

Once again, participants could pay an average of forty dollars to obtain an autograph or a photo with one of the dozens of stars present. For example, Matthew Lewis and Bonnie Wright, who play Neville Longbottom and Ginny Weasley respectively in the Harry Potter movies.were among the guests, as well as Grace Van Dien, from the series Stranger Things. In addition, there were actor Malcom McDowell and wrestler Kevin Owens.&nbsp ;

“WE'VE BEEN THINKING ABOUT IT FOR THREE YEARS”

A regular at Comiccon, Harmony Beaudoin Pelletier chose this year to embody the lady holding the torch in the logo of the production company Columbia Pictures. She says she opted for originality, which paid off, as there were many curious people who wanted to photograph her costume. “I really think it's in the biggest crowds we've seen,” she says of the festival's attendance. “There are more varieties of costumes because there are a lot of new shows and new movies that have come out since 2019,” adds Emma Desjarlais, in charge of holding the background for her friend's costume. Harmony.

“WE TRIP ON HORROR”

The couple of Eric Clouatre and Sophie Bélanger have long awaited this moment to express his passion for horror movies. “Making my costume took me almost a year. I bought the pieces all over the place, from Montreal to Toronto , explains M. Clouatre, who spent $600 to make his disguise of the main character of the movie Leatherface, released in 2017. ” I'm a complete fan of It “, summarizes, for her part, Ms. Bélanger to explain her costume from the most recent version of this cult film. < /p>

A participant who remained silent amazed many with his incredible costume inspired by the films of Transformers. Dozens of people constantly gathered around him to photograph his disguise, which included a helmet with an automated visor.