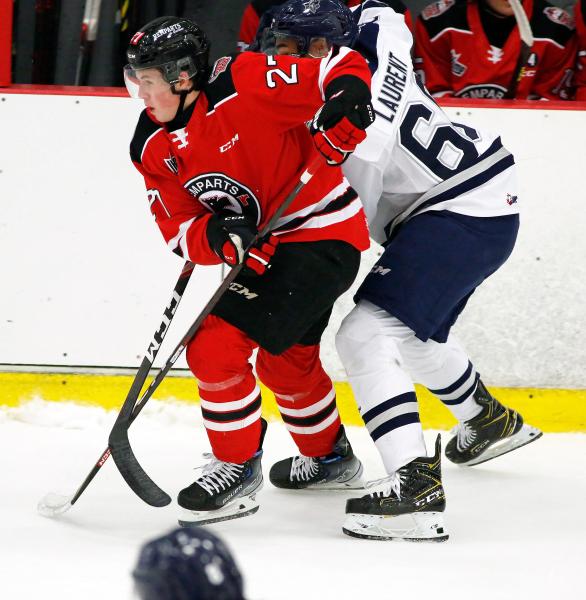 Watching his compatriots Juraj Slafkovsky and Simon Nemec go first and second in the last NHL draft, Frantisek Ridzon allowed himself to dream of the NHL, too. And it was Quebec he chose to achieve his goal.

The 17-year-old forward, whom the Remparts drafted 54th overall in the NHL European Draft, knows Slafkovsky and Nemec very well.

He rubbed shoulders with the Montreal Canadiens' first overall pick with the national under-16 team in 2019-20.

In fact, Ridzon's eyes light up when asked. asks if even then Slafkovsky stood out.

“Oh yes. He was really good. Really good,” he says in very good English, which he says he learned at school in Slovakia.

As for Nemec, he played with the same program as him last year, that of HK Nitra. Defender Nemec, chosen by the Devils, spent the full season with the big club while Ridzon played mainly with the under-18 and under-20 program.

He was however able to play two games in the pros.

“To see Nemec come out second was more of a surprise than Slafkovsky. On the other hand, he has an excellent hockey IQ, is a very good passer and handles the puck well.

While Slafkovsky and Nemec are a year older, Ridzon has especially developed a bond of friendship with the one who is considered another top prospect for the next draft, Dalibor Dvorsky.

En moving to Quebec, he hopes to get a chance to be drafted, too, the same year as his good friend.

“The Remparts are the best organization in the league and I thought it better for my career to come and play in Canada. My dream is to be drafted into the NHL and I hope to achieve it,” he mentions.

Ridzon does not have the same profile as his three compatriots, however. In Quebec, he will have the opportunity to be seen by recruiters and demonstrate the progress in his game. In his first preseason game, Tuesday night against Rimouski, he admitted that he was not at his best.

“I didn't feel good on the rink. I still have to deal with the jet lag and I had new equipment. On the other hand, I feel better every day. »

For Patrick Roy, we will have to be patient with his new protege.

« He will need time to adapt on the small ice. We do not intend to place him in a role where he would play on the first two lines. We want to give him time to adapt and feel good. We want to take the pressure off him a bit. It is believed that he will eventually be able to play an attacking role. He's not a bad skater and he has good hands. He just needs to get out of his way. ”