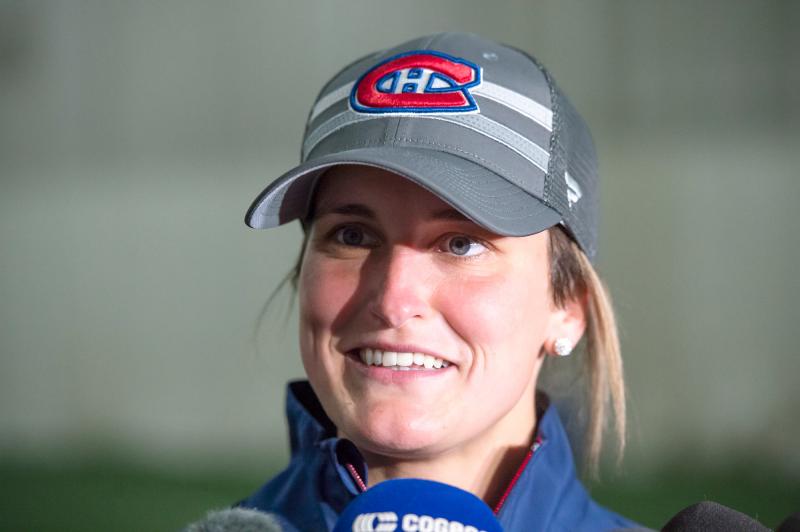 Appointed as a player development consultant for the Canadiens at the beginning of June, Marie-Philip Poulin had the chance to take her first steps as a coach within the organization. An experience that she greatly appreciated.

“I observed, I was a sponge, I learned a lot”, she listed on the The last training session of the development camp ended today.

Poulin was not in her first experience as a coach. For the past few years, she has held summer camps for young girls. Of course, we were on a whole different level.

Passive at the start of the week, the captain of the Canadian team slowly got out of control. She has been seen on a few occasions offering advice to Habs rookies.

For the 31-year-old athlete, this week in Brossard showed him that coaching could be an option for his post-career.

“It sure gave me the taste. Hockey has been in me since I was very young. I love doing this. It's really cool to see this facet, to see the work that is done behind the doors, it's crazy,” she mentioned.

But before thinking about retirement, Poulin still has at least four good years of hockey to offer to the Olympic program. If she gave advice to young players, she also took advantage of this baptism in the CH entourage to add strings to her bow.

Adam Nicholas, who led training throughout week, allowed him, through the exercises to which he subjected his players, to discover new aspects of the game.

“I was impressed by the little skillsthat you don't see in a game, but that make a big difference,” she said. We see the guys that matter, but we forget those little details that change a match. »

Little details that she will hasten to implement.

«  Yesterday afternoon I was skating alone and wanted to try everything I had seen that day, she said. I can't wait to get back on the ice and try to put it all into practice again. »

She will probably have no problem assimilating these new features, much to the chagrin of her opponents.&nbsp ;

The Olympian will not play for the Montreal team

The arrival of a Montreal franchise in the Professional Hockey Federation does not only make people happy. At first glance, this is good news for women's hockey. However, for the girls who created the Professional Women's Hockey—Players Association, the main objective is not yet achieved.

The business model seems to be in doubt.

“We created this association with the objective of setting up a viable league in the long term, not just for a few years. The PHF created this league, they put something in place. But they don't necessarily have all the resources we're looking at, analyzed Marie-Philip Poulin, met on the sidelines of the Canadiens' development camp.

So don't count on the best player in  hockey in the world to wear the uniform of the Montreal team or any of the six other teams on this circuit.

“ I started on the first day with the Association that we created. I believe in that a lot. We have good people behind us. We hope to move forward soon,” she said today.

Set up in May 2019 after the dissolution of the Canadian Women's Hockey League, this association has seen the day after more than 200 of the world's top female hockey players decided not to play professionally the following season.

Since then, the players of the Association, divided into five regions, compete on different tours. However, nothing concrete yet for the creation of an official circuit has come from this initiative.

“I have said it several times: great things take time. It is sure that we become a little less patient, but we are going in the right direction with the Association, supported Poulin. I hope we'll put that in place in the next few months.

Obviously, we can't be against virtue. Since women's hockey has been trying to get more visibility for so long, it would be strange if the most high-profile players were spitting in the soup.

“It will allow more girls to play hockey after college. We push for the same thing, admitted the triple Olympic gold medalist. But people have different views. I hope we will push in the same direction. Women's hockey is together.”