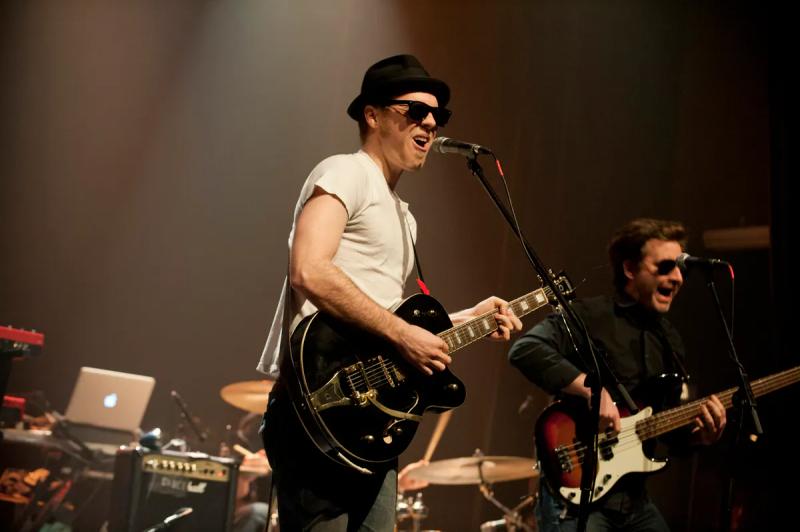 Take some projects! When he's not working on his songs, he lends a hand in the studio to other artists.

And with the concerts resuming, his schedule should be overflowing. And all this hypercreativity comes together in music at all times.

You've recorded 18 albums in about 20 years…

And that's just my solo albums. I made several group albums. Several albums with my brother in Skinny Bros. I am a very prolific artist. It's not my ego talking. It's like a creative need in me. I still compose two or three songs a week.

With so much material, how do you choose the songs you will perform?

What did your parents listen to when were you young?

My father is from Argentina, but he is Italian… He listened to traditional music. But he also listened to a lot of Motown and rock. He was a big “fan” of guitarists like Hendrix.

My mother is from Lithuania. She listened to a lot of traditional music, but a lot of funk and Motown too. And at the same time, since we lived in Quebec, there was Harmonium, Robert Charlebois and Boule Noire playing.

And when you were young, what did you listen to?

My influences were quite eclectic. In high school, I remember Daniel Bélanger, Jean Leloup and Daniel Lanois.

My guardian when I was younger was Gus Coriandoli, the singer of Me, Mom & Morgentaler. When he started his band singing in Spanish, French and English and playing ska, rap, it had a huge influence for me.

When you write a song in English or French, is it the same process?

It's different. When I started composing in French, it was a big challenge. In English, my vocabulary is much better. So I can look for nuances. There is a literary sophistication, references. In French, with my small limits, it forces me to really write with simplicity, with efficiency.

Which songs did you learn on the guitar first?

I started taking lessons when I was 8 and pretty soon left. I am self-taught. I learned to play the guitar by watching Jimi Hendrix music videos. He is left handed. He plays with his thumb and I copied the way he plays. But I'm not left-handed and I still use my thumb today. I play in a weird way.

And who would your great influences as a lyricist be?

On the French-speaking side, Jean Leloup had a great influence on me. For the English side, Joe Strummer from The Clash and Donald Fagan from Steely Dan. I also grew up a lot with hip-hop. When I discovered Wu-Tang, A Tribe Called Quest, it was huge for me.

As a director, which international artist would you like to work with in the production of an album?

I would like to go into a “time machine” to work with Allen Toussaint and Dr. John. For the work they did with The Meters, with Ernie K-Doe, Betty Wright, they would be my dream collaborators.

Your political commitment is closely linked to your creation. Has an artist or band influenced you in this regard?

The Clash. They were able to talk politics, but it was never populist. They weren't afraid to talk about Karl Marx, about the civil war in Spain. They challenged their audience. “Spanish bombs” had a huge influence on me. It was a revolutionary speech, but not “preachy”.

Is there a musical genre that you haven't explored yet, but that we could hear on your albums possibly?

I just fell in love with cumbia. I listen to a lot of cumbia and shisha. I listen to South American music a lot. There is a strange alliance with electro music, but also with punk rock. Maybe I'll let myself be influenced a little.

Which performer would you like to hear cover one of your songs in your wildest dreams?

On the new album, I did a song called “Time”. This is a song I wrote for my grandmother who passed away. I would like D'Angelo to sing it. It's really written for him. That would be much better than my version! (Laughs…)

You recorded an album for children, “Something Different”. What would be your favorite children's album?

The big influence for this album is singer Raffy. He's an activist, but he sings for children. He was one of my favorite singers. He had made an album recorded by Daniel Lanois, “Singable Songs for the Very Young”. It became a huge international hit.

I really like “2001: A Space Odyssey”. I really like this soundtrack. I also like Tarkovsky. For the “synthesizer” side and the “vibe” created in his films.

Your plans for the summer?

Many surprises are coming are coming. I have several albums coming out. I have several collaborations too. I made an album with a young Quebec rapper. NDG “represent”! (Laughs…) His name is Remy Picasso. He is really cool and very good. Also, I have my two vinyls that have just been released, one in French, one in English.