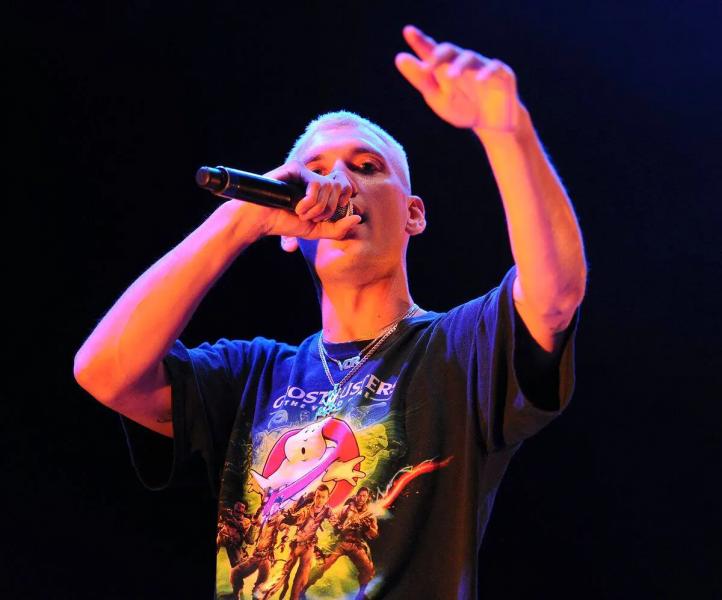 Maskoutain-born rapper Rymz took four years to release his new album, scheduled for the fall. But he hasn't been idle in the meantime.

Over the past few years, Rymz has chained singles, collaborations, shows. And he intends to continue the adventure with a tour of France soon.

Always ready to represent his hip-hop community, he likes to talk about the work of his friends when the time comes to show his preferences musical.

Has your method of working in the studio changed over the course of your albums?

Certainly yes. Before, I arrived more prepared. But now I like to create with the “beatmakers”, with the people who are there. I like to let myself go on the spur of the moment.

Have you made your team listen to albums to give them an idea of ​​the “mood” you would like to find again?

Especially with “beatmakers”. I arrive with “vibes” or species of textures that I would like to find. I do it regularly.

Often, it is in series or in a film. There is always a little epic side. It's effective. Film music is fairly short sequences. It’s perfect for rapping or for “samplings”. Hans Zimmer is the best example. It's so epic and grandiose.

On one of my songs that had been popular at the time, “Y sais pas” (with Mauvais Acte), I had taken a “sample” of “Roi Leo”.

Do you come from a musical family?

My mother played the piano. We have always had a magnificent ancestral piano at my house. An upright piano. My mother put on music in the house. Of course it could have attracted me. She also always wrote little poems that she carefully kept hidden away.

And what music did your parents listen to?

My mother was Eurythmics, Queen, The Cranberries. My father was more about Quebec music: Plume Latraverse, Richard Desjardins. All Harmonium albums. He liked Francis Cabrel too.

In high school, what were your essentials?

When gangsta-rap arrived, it was Dr. Dre and his whole gang. Before that, it was more The Offspring, Limp Bizkit. But “2001” by Dr. Dre is an album that I really listened to a lot. That and Eminem’s “The Marshall Mathers.”

Otherwise, what I was listening to on repeat is really unknown. It was a group from Saint-Hyacinthe called Les Patriotes… I had bought their tape at the Videotron Club. Also, “L'Accent Grave” by Yvon Krevé, I could sing it to you by heart.

Was it the first in “queb rap” that turned you on? ?

Dubmatique I liked that, but since they spoke in French, it was more in the category “French rap” in my head. Like IAM and “L’école du micro d’argent” it is an album that I listened to a lot. Like the Funky Family…But in Quebec, it was really Yvon Krevé, Les Patriotes, Sans pression, Muzion.

Were there any hip-hop “shows” playing in Saint-Hyacinthe?

Yes! It was big “shows” and more. I had seen No Pressure play there. I saw him two weeks ago in Baie-Saint-Paul and asked him if he remembered that he asked my gang and I to film his “show”.

At the end of this “show”, it was Loco Locass after him. There he was enraged. He didn't want to leave and he destroyed his then manager's tank after the “show”. He was jumping with both feet. His arm was in plaster. He was spanking on the tank. It's one of my first memories of a rap “show” in my life.

Was it the “show” that made you want to dedicate yourself to music too?

In my memories, there was also Farfadet who sang with, I think, the Chiens de campagne at the time. They performed as well. That's what gave me the taste. Because I saw that we could do that in Saint-Hyacinthe, sing on a “stage” and rap.

Richard Desjardins. He's a storyteller that I love to listen to.

An album that you can listen to without “skipping” any “tunes”?

What a good question ! I would tell you any Loud Lary Ajust album. It's so well constructed.

In your wildest dreams, which producer or musician would you like to work with?

It would be a pianist… Jean-Michel Blais .

Your latest crush in music?

I'm going to rap because I want to represent my community. There is an album that I really liked. They're guys I've known for a really long time, Sauce and Sadam Huss. Their album is called “Holy Grail”. It brews!

Otherwise, recently I went to see Dua Lipa. It's more pop, but she does it so well.

Your plans for the start of the school year?

There is finally my album after four years! But I'm not stingy with time. I take advantage of it. I'm not trying to deliver stuff.

There's also a tour with Youv Dee. He is an incredible French artist. We did the Francos together. It really clicked. He returned to “chiller” two weeks after the “show”. We made songs. And there he returns for a tour in Quebec.

We return to France afterwards for a tour with him. We asked to make small squares too so that it would be really rock 'n' roll. “Shows” that brew like in time!