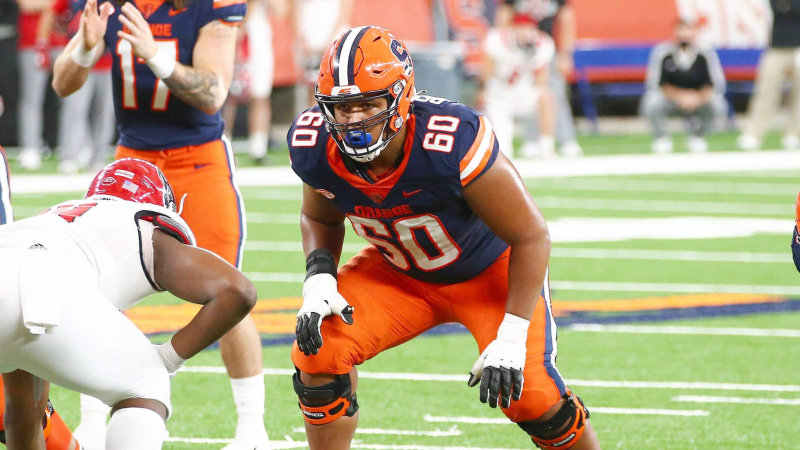 Matthew Bergeron will benefit from a showcase rarely offered to Quebec players when he takes part in the Senior Bowl, in front of a panoply of NFL coaches and recruiters.

< p>In Mobile, Alabama, the Syracuse University Orange tackle will be part of that key step before the spring draft. The Senior Bowl brings together the best prospects in the United States who have completed their years of university eligibility.

The athlete from Victoriaville will participate in the game which will take place on February 4, as well as practices during the previous days under the guidance of NFL coaches. He will only become the second Quebecer to take part in the Senior Bowl, presented on the airwaves of the NFL Network.

“   live. I feel grateful,” he told the Journalduring an interview.

Two years ago, cornerback Benjamin St-Juste took advantage of an invitation to the Senior Bowl to get noticed and thus increase his draft value. He was then selected in the third round by the Washington Commanders.

“St-Juste dominated in the Senior Bowl. He had put himself in a great position for the draft and I would like to follow in his footsteps. I want to excel like he did,” said Bergeron, well aware of the impact of the Senior Bowl on his future.

“It excites me and it motivates me to see that someone back home performed like that against serious NFL prospects,” he added.

It is often cliché to say before a series of important events that you have to attack the workload one day at a time.

Regardless, this is the approach that has always served Bergeron and that he will continue to adopt rather than looking too far ahead.

Because after the Senior Bowl, he will be invited to camp evaluation (Combine) of the NFL, which annually brings together some 300 hopefuls in Indianapolis, at the beginning of March. Then will follow his Pro Day, an individual training in front of recruiters on the Syracuse campus, on a date yet to be determined. The draft takes place from April 27 to 29.

“The next step is practice and after that is the Senior Bowl. If I start telling myself right away that I have to perform at the Senior Bowl, then at the Combine and then at Pro Day, that brings a lot of unnecessary pressure.

« C That's how I handled my NCAA journey because stress could come from anywhere, but I stayed focused on one goal at a time,” he wisely recalled.

Analysts' opinions vary on Bergeron's draft value, but many believe he could hear his name before the end of the third round.

Analytical site Pro Football Focus< /em> ranks him as the 97th best prospect. The Bleacher Report team goes so far as to position him at 33rd.

After three difficult seasons, Matthew Bergeron is delighted to have been able to end his university career at Syracuse on a positive note by helping his team qualify for a Bowl during the holiday season. It remains to be decided whether he will participate.

The Orange will participate in a first NCAA Division 1 Bowl since 2018, when the team will face the University of Minnesota Gophers, on December 29, as part of the Pinstripe Bowl at Yankee Stadium.

The former Filons du Cégep de Thetford has long dreamed of such a moment, but he swings between the head and the heart.

More and more players who are recognized as good hopes in the draft choose to skip the Bowls season, to reduce the risk of injury and to focus all their energies on the grueling process that leads to the NFL Draft.

“Right now I'm still debating the pros and cons. The draft process is long, but I have the support of my family, teammates and coaches in all of this, so I'm really lucky,” he said.

Even if he does not yet know if he will be in the Pinstripe Bowl alongside his family, Bergeron can already relish the fact that he has helped the program regained its former glory with a 7-5 record, after losing seasons of 5-7, 1-10 and 5-7, from 2019 to 2021.

“I am really proud of what we have accomplished as leaders with the program. We had three seasons full of losses and it was difficult, but we did a good job of changing everyone's mindset. »

At Syracuse, the 22-year-old was far from just another player. Dominant on the field and appreciated in the locker room, he was elected among the group of captains by his teammates, before the season. and, whatever happens afterwards, Bergeron is not about to forget his formative stint in Syracuse.

“ In four years here, I have so many memories , whether good or bad, and which have built me ​​as a player. All my life, I will tell stories that I lived here, to the point where people around me will be tired of hearing them! Relationships with teammates extend beyond the field and many will be my lifelong friends. »