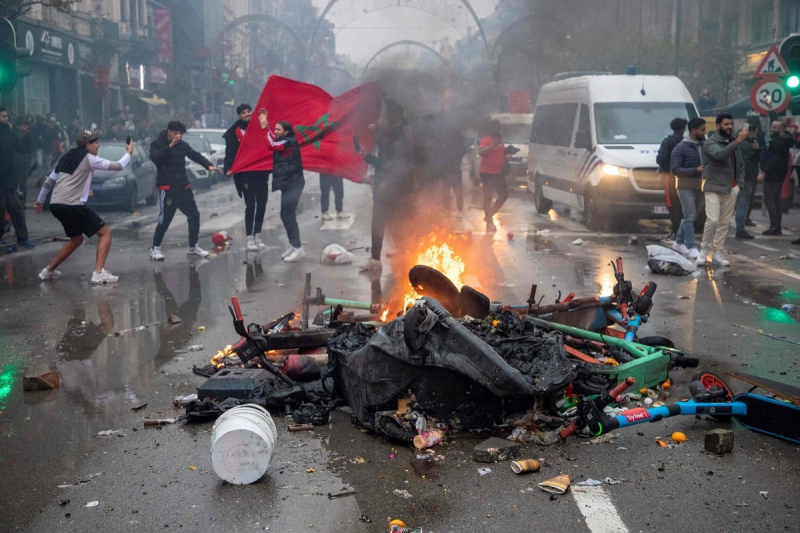 Violence erupted in Brussels on Sunday after Morocco won the FIFA World Cup against Belgium, with a few “dozens of people” attacking police and setting a car on fire and street furniture.

The police reported a return to calm from 7 p.m. and announced that they had made eleven arrests in the capital, including one person placed in custody.

Incidents erupted on the sidelines of spontaneous gatherings of hundreds of Morocco supporters who peacefully waved flags and fireworks as many cars honked their horns. Moroccans are one of the main foreign communities in the country.

Even before the end of the match, in the city center of Brussels, “dozens of people, some of whom were hooded, sought confrontation with law enforcement, compromising public safety,” police said in a statement.

She reported the use of pyrotechnics, the throwing of projectiles, demonstrators armed with sticks, a fire on the public highway and the destruction of a traffic light.

“A journalist was injured in the face by fireworks”, still according to the police who then decided to intervene with a water cannon and tear gas.

A hundred police officers, who wiped jets of projectiles, were mobilized in this intervention. A surveillance helicopter flew over the city.

The forces of the order asked residents and supporters to avoid certain areas of the city center.

Metro and tram stations were closed and streets blocked to limit crowds.

“I condemn in the strongest possible terms the incidents of this afternoon. The police have already intervened firmly. I therefore advise supporters not to come to the city center. The police are using all their means to maintain public order”, reacted the mayor of Brussels, Philippe Close, on Twitter.

In Liège (east), around fifty people attacked a police station , smashing windows and damaging two police vehicles. The police also intervened with a water cannon. Storefronts and a bus shelter were vandalized.

Incidents also broke out in Antwerp (north) where a dozen people were arrested.