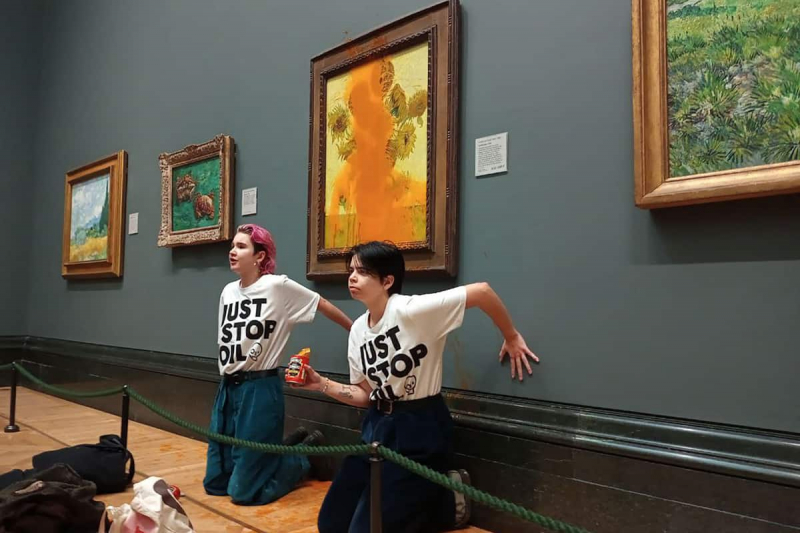 Environmental activists from the Just Stop Oil movement threw tomato soup on Van Gogh's 'Sunflowers' masterpiece at the National Gallery on Friday, causing only minor damage to the framework, a spectacular new episode of a month of action in London.

According to press images released by the movement, which calls for the immediate halt to any new oil or gas project in the United Kingdom, two activists threw the contents of two cans of soup at the work, valued at over $84 million.

Police 'rapidly attended the National Gallery this morning after two female protesters threw a substance at a painting and then stuck themselves to a wall', explained Scotland Yard in a press release. They were arrested, in particular for “degradation”.

The museum said two people 'appeared to stick to the wall adjacent to Van Gogh's Sunflowers (1888)' and also 'threw a red substance – which appears to be tomato soup – at the painting'. p>

The frame suffers from “minor damage”, but the painting is “intact”, assured the National Gallery.

This new stunt from the group , which had already targeted works of art in the past, is part of a series of actions that began in early October in the British capital, during which it notably blocked roads on several occasions.

After sticking to a wall, one of them launches: “what is worth more, art or life ?”.

“Do you care more about protecting a painting than protecting our planet and its people?” she asked.

“Human creativity and genius are on display in this museum, but our heritage is being diminished because of our government's failure to act on the climate and the cost of living,” Just Stop noted. Oil on Twitter, explaining that the band's approach was to “choose life over art.”

“The cost of living crisis comes from fossil fuels – daily life has become unaffordable for millions of families who are cold and hungry – they cannot even afford to buy a can of soup”, a said Phoebe Plummer, a 21-year-old activist quoted in a statement from the movement.

“At the same time”, “people are dying” because of “fires and droughts caused by climate change”, she argued. 'We can't afford new oil and gas projects', they'll 'take it all away'.

The 'Sunflowers' on display at the National Gallery were acquired by the museum in 1924, according to its website internet.

In total, Van Gogh created seven versions of “Sunflowers”, five of which are exhibited in museums.

One of them, the Van Gogh Museum in Amsterdam, pointed out that he kept a “close eye on developments” that could affect its own security measures.

“There are hundreds of ways to draw attention to climate issues. It shouldn't be one of them,” he said.

Members of Just Stop Oil refer to the Suffragette movement, which at the beginning of the 20th century were taking on artwork to win women's suffrage.

To support five of their imprisoned comrades, members of the group dumped orange paint outside the Scotland Yard headquarters on Friday in London and blocked traffic. Twenty-four people were arrested, according to the police.