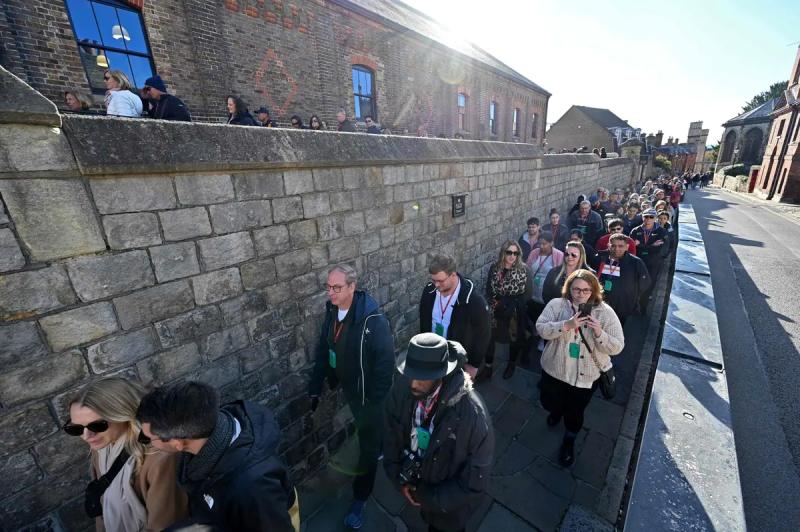 WINDSOR | Bouquet of roses and condolence cards in hand, Vivian Bjorkenstamn is about to enter the grounds of Windsor Castle, where the public can now gather in front of the tomb of Elizabeth II.

“She is part of our DNA, she will be sorely missed”, she confides, coming from Toronto to “pay homage” to the sovereign, who was also head of state of Canada, one of his 15 kingdoms at his death.

Between subjects very attached to the monarch and tourists simply lucky to have reserved tickets on this specific date, hundreds of people crowded Thursday in front of the gates of the queen's favorite castle, about forty kilometers west of London, which had been closed since his death.

In the queue, impatient visitors exchange their anecdotes about the monarch. “She had a presence,” “she seemed to know you,” says Julie Davies, who recounts having met her 40 years earlier at the inauguration of the hospital where she worked.

Accompanied by her husband Allan, she came from the Liverpool area to pay her respects to the last Home of Elizabeth II, buried in the Memorial George VI, named after her father. A moment they will remember “for the rest of their lives”.

Like millions of Britons, the 60-year-old couple followed the lavish funeral on television. “All of a sudden, when you actually see the castle, everything comes to life,” says Julie, visibly moved.

Inside from the castle, a long line crosses the park to the chapel of Saint-Georges. It takes almost an hour. “A trifle” compared to the ten hours of waiting endured by thousands of anonymous people to gather in front of the coffin of the queen before the burial, underlines a couple from the region.

For them, it's more about seeing “with their own eyes” a page of UK history.

For a few seconds, in front of the grave, the whispers fade away.

The name of Elizabeth II is engraved in gold letters on the black marble tombstone, alongside those of her husband Prince Philip, who died in 2021, and her parents King George VI and Queen Mother Elizabeth.

The ashes of Princess Margaret, the monarch's sister, also rest in the George VI Memorial.

“Seeing the Queen again alongside Philip, with her parents, was very beautiful, very moving. I cried, ”says Tracey Fletcher, who came from London with her best friend to say goodbye to the Queen.

Like most Britons, “she's everything you've ever known, she's always been there”, she insists.

The two friends confide that they will return on pilgrimage to the castle, which welcomes around 1.5 million visitors each year.

“I feel really privileged”, continues Tracey, very happy to have been among the first people to see the royal tomb. The “best way” to say “one last goodbye” to their beloved queen.

Terence Tan, a tourist from Singapore, enjoys just being there “at the right time”, completely by chance, but delighted to witness a “once in a lifetime” event.

Amy Schrader and her sister Sarah Exner, of Washington, bought their tickets as soon as the castle reopening date was announced. Hard-won tickets, with a lot of “determination, stubbornness”, they laugh, delighted.

Amy feels “infinitely honored” to be one of of the first people to be able to pay homage to the Queen: “It's so unique, it gives me goosebumps just thinking about it”.

In Windsor, moved visitors crowd in front of the tomb of Elizabeth II