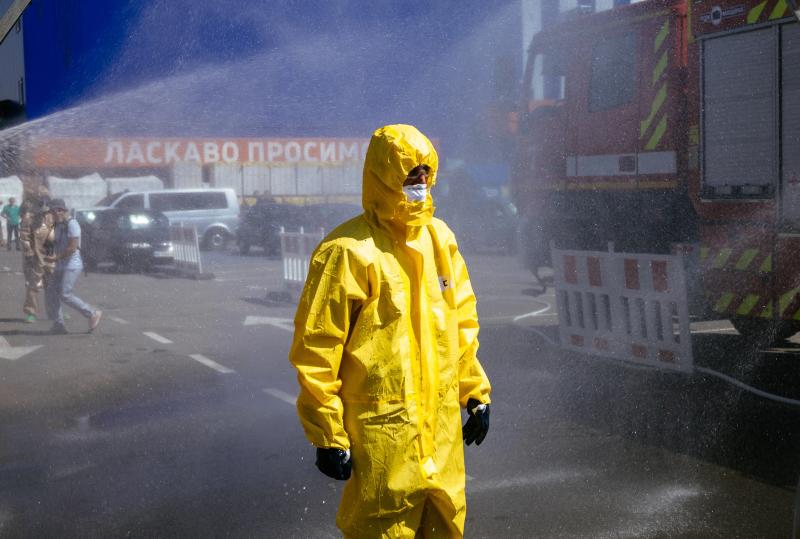 In Zaporizhia, near the eponymous nuclear power plant, occupied by Russian forces and the target of regular bombardments, the inhabitants are preparing for the worst. Receiving their iodine tablets on Monday, some are already imagining seeing the reactors explode.

“You know, we saw the Chernobyl accident, the threat was already very great , but we survived, thank God. Today, the threat is total, 100%”, blows Kateryna, a 68-year-old retiree, who still suffers from thyroid problems after the 1986 disaster.

“It's my prediction: six reactors instead of one”, she says, referring to the capacity of the Zaporizhia power plant, compared to the only reactor damaged during the Chernobyl disaster, which is still in all spirits.

Like a dozen other residents, Kateryna came to a school in the city of Zaporizhia on Monday to receive iodine tablets to take in case of radioactive contamination.

These pills saturate the thyroid to prevent radioactive iodine from attaching to it. They have been distributed by local authorities in 13 places in Zaporizhia since August 23.

“The tablets are to be taken in case of danger, during the first six hours after an alert”, explains Elena Karpenko, a nurse in the city, located in southern Ukraine.

If the inhabitants of Zaporijjia fear disaster, it is because they live near the largest nuclear power plant in Europe, located in the other side of the river, barely fifty kilometers away as the crow flies.

For weeks, Moscow and kyiv have been accusing each other of dangerous bombings of the territory of the power station, occupied since March by Russia. A mission from the International Atomic Energy Agency (IAEA) is expected there in the coming days for an inspection.

The Director General of the IAEA, Rafael Grossi, who is leading this mission himself, has been asking for months to be able to go to the scene, warning of the “real risk of nuclear disaster”.

Au- beyond the bombardments for which the Russians and Ukrainians blame each other, kyiv accuses Moscow of storing heavy weapons and ammunition and of having a garrison of 500 soldiers on the site.

The Kremlin, for its part, assures have only personnel responsible for security and on Monday called on the international community to put “pressure” on Ukraine to reduce tension around the nuclear power plant.

After several strikes at the site that caused the power plant to be temporarily cut off from the electricity grid last week, the Ukrainian operator Energoatom estimated on Saturday that there was a risk of “sputtering of radioactive substances”.

In Zaporizhia itself, the emergency services are already carrying out exercises to evacuate residents and train to decontaminate radioactive dust. Nearly two tons of special decontamination solution are stored in facilities in the city.

In the event of a disaster, alarms will sound twice for residents, one day apart. one on the other.

“Maybe the radioactive cloud won't reach where the people are. When the second alarm sounds, we will know clearly where it is spreading”, explains Taras Tichtchenko, chief medical officer for the region.

“We will then have all the information on clean routes and places to evacuation,” he adds.