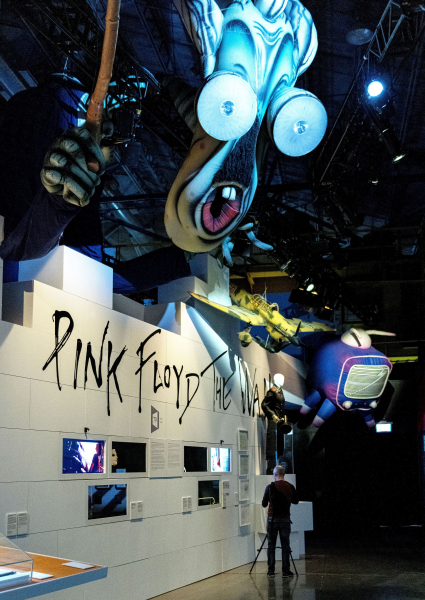 Nick Mason in front of the two statues of The Division Bell.

Starting in London in 2017, this exhibition on the legendary British band is coming to Montreal. The city is forever connected to Pink Floyd with the album The Wall, which Roger Waters dreamed up after a concert at the Olympic Stadium.

In all, more than 350 artefacts and objects on the group are presented in chronological order at the Arsenal contemporary art. “It's almost the perfect place to hold this exhibition, because there's a lot of space,” said designer Aubrey Powell, credited for designing the famous covers for The Dark Side of the Moon and Wish You Were Here.

During the visit, you can see the musicians Nick Mason, Roger Waters and Richard Wright while they were architecture students in London in 1962. It was after recruiting Roger “Syd” Barrett, two years later, that they start making music together. Barrett suggests the group's name, The Pink Floyd, in honor of two blues musicians: Pinkney “Pink” Anderson and Floyd “Dipper Boy” Council.

After the Barrett years, we follow the band's rise to popularity with the albums The Dark Side of the Moon and Wish You Were Here. A global phenomenon, Dark Side has sold 46 million copies worldwide. There are 7,000 copies still sold every week today. The album was over 18 years on the Billboard 200 chart!

In the exhibition, you can hear the musicians talk about how they created these masterpieces. It also explains how Aubrey Powell, with his company Hipgnosis, designed the covers, along with Storm Thorgerson.

The characters of Delicate Sound of Thunder.

“When I did my presentation for Dark Side of the Moon, I had brought a dozen ideas, Powell told Arsenal on Thursday. I posted them on the wall. When the musicians saw it (the image with a prism that diffracts light), they all said: this is it! But we had no idea it would become such an iconic symbol. »

Available as an audio guide, this exhibition is a must for anyone who loves Pink Floyd. All the iconic elements associated with the band are there, including the famous pink pig from the Animals cover and the two huge statues from the The Division Bell cover.

Pink Floyd The Exhibition: Their Mortal Remains is presented at Arsenal contemporary art in Montreal until December 31. For info: pinkfloydexhibition.com.