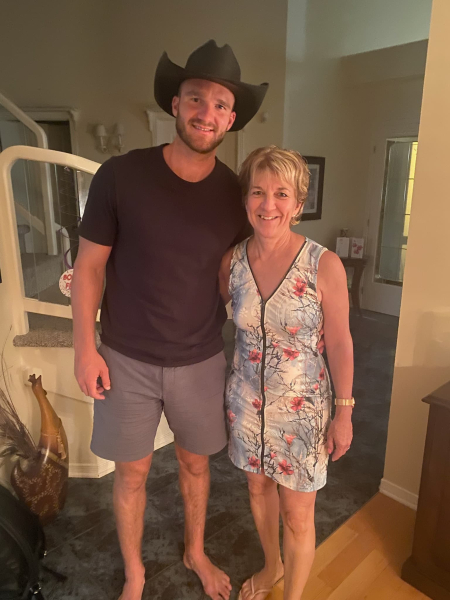 Jonathan Huberdeau presented a check for $25,000 to the Cité de la Santé Foundation last June. However, he wanted to do more. The Calgary Flames forward has just signed a total sum of $300,000 over a six-year period.

This amount will be used to pay part of the construction costs of the new family center at Laval Hospital. In addition, Huberdeau will continue to be an ambassador for the foundation's annual golf tournament.

Huberdeau and his family have a strong attachment to the Cité-de-la-Santé hospital. The athlete was born there in 1993. His brother Sébastien and his sister Josiane also lived their first moments of life there.

It is also in this hospital that his mother Josée Blondin fought two battles against breast cancer. The first in 2003 and the second in 2021.

“I decided on this with my uncle, said Jonathan Huberdeau during an interview with the Journal. My mother's last cancer made me realize that I could give a boost to the health field in Quebec.

“I decided to go ahead and join forces with the Cité-de-la-Santé. We had great success with the golf tournament. At that point, I said to myself, why not make a long-term commitment?”

Huberdeau used the last year to get to know the foundation better. He went to visit the premises and meet with officials last summer. The values ​​of the latter joined those of the athlete.

“I didn't want to put my name on without knowing what was going on. I went for a tour this summer and everyone was happy I was there. I had the chance to meet several doctors, technicians and nurses. I felt it was a beautiful family.”

A source of inspiration

Last year, Huberdeau had the best season of his NHL career with 115 points in 80 games. He finished tied for second in scorers with Johnny Gaudreau.

He does not hesitate to say it: his mother served as a source of motivation for him.

“What was happening to my mother motivated me to do my job. I wanted to do it for her. Everyone in my family was strong in this ordeal.

“She wanted me to continue to play well and work well. She was fighting cancer so I thought I had to fight for my season.”

Ms. Blondin did not miss a Florida Panthers game despite the treatment she was receiving. Even though she couldn't attend her son's matches, she gave him an indescribable energy.

“I was thinking about it, but I couldn't do anything. I was trying to be positive like my mom was.”

After every game, his mom would text him congratulating and encouraging him. This is still the case today as he now wears the colors of the Calgary Flames.

The strength of a mother

Huberdeau was 10 years old when his mother suffered his first cancer. He didn't quite realize what was going on. Last year, when cancer struck again, the reality was quite different.

“So many people have cancer. It is sad to see this, he added. I realized that I had the means to do something.

“When a member of your family has it, it hits even harder. My aunt also had cancer.”

His mother's last battle, he lived it from a distance because of his hockey season.

“I don't wasn't there with her. Luckily FaceTime exists. Everything went well, but my mother was strong.”

The Cité de la Santé Foundation aims to raise $10 million by 2025 to fund various large-scale projects. To date, they have already raised $4.3 million of that amount.