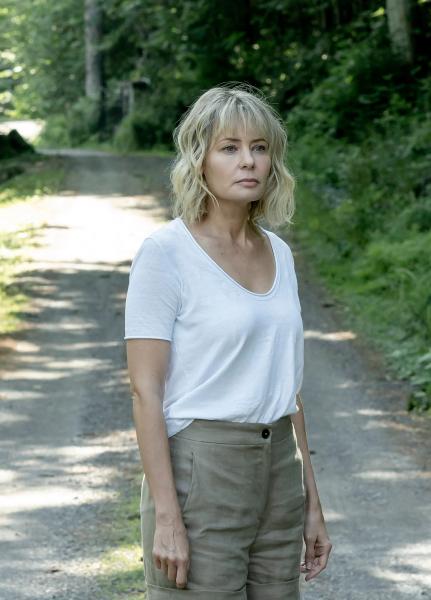 “It's an important and above all relevant story,” says the author of The Pack , Catherine-Anne Toupin. Presented many times in the theatre, the work written by the actress is transported to the big screen, under the direction of director Anne Émond.

If it is a director who has been chosen to bring the psychological thriller La meute to the screen, it is no coincidence. For Catherine-Anne Toupin, creator of the play and screenwriter of the feature film, it was important that this story addressing the theme of violence be presented from a female point of view.

“It makes there are little nuances, little fears and little frailties that would arguably be less visceral for a man in understanding and in the human experience of that,” she explains.

By  this she means the story of Sophie, a hunted and traumatized young woman who, seeking to escape her reality, finds herself hundreds of miles from home, welcomed by Martin and his aunt Louise. And a string of events that must be kept secret, suspense and dramatic twists oblige.

“There are a lot of people who wanted to make a film of the play, but my instinct told me that it was not that, affirms the one who, the day after the theatrical premiere, had already received two calls from directors. I met 12 talented people with whom it would be a pleasure to work, but when I met Anne [Émond], she had been talking to me about the script for 15 minutes and it was as if she had entered in my head. As I am a very impulsive and instinctive person, I asked her if she wanted to direct the film. It's my script, but it's Anne's film. »

If we can speak of a professional love at first sight between Catherine-Anne and Anne Émond, we can also speak of the unwavering trust between the three main actors; the same as in the play.

Catherine-Anne thus takes on the role of Sophie, Guillaume Cyr that of Martin and Lise Roy that of the aunt of the latter, Louise. A trio that the creator would never, ever wanted to replace and an essential mutual trust in order to bring this story to difficult themes and scenes.

” It was one of the fears of the director… she didn't want our acting to be too theatrical, explains Guillaume Cyr who is here at his 25th feature film. For me, it is rather an extreme advantage to have played this piece 80 times. Our trio knows the dynamic very well and the characters are clear. For the rest, it is the experience that allows us to qualify our game. »

Delayed for a week due to cases of COVID within the team (including Guillaume Cyr himself), the shooting of the feature film, produced by Félize Frappier for Max Films Media, Louis Morissette and Louis-Philippe Drolet for KO24, began on July 4. Twenty-nine days of filming are scheduled for this set, which has taken care to tighten its sanitary measures.

Phil Roy's first solo show, in which the comedian expresses both his refusal to age and acceptance of adult responsibilities.

Fleeing justice after committing a crime, a devout preacher founds a church in a remote bled. With Farrah Fawcett and Miranda Richardson.

With two friends, a teenager tries to gain the confidence of one of the 23 personalities of the man who sequesters them. With James McAvoy, Anya Taylor-Joy and Betty Buckley.