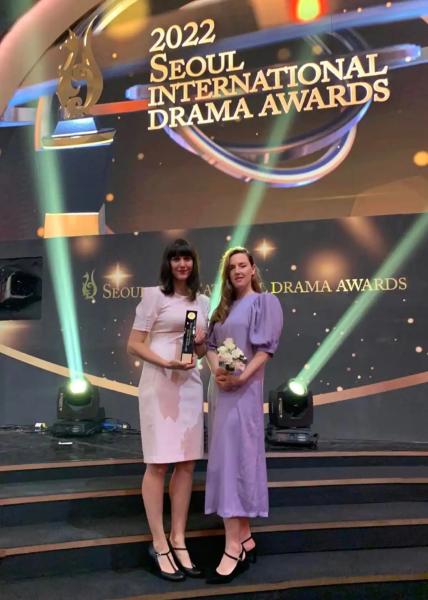 Over the past few months, Florence Longpré, who “has a great fear of flying”, has had to overcome her phobia on several occasions, as her work as an actress and screenwriter has led her to shine abroad.

His passport has been stamped at international airports in Berlin, Cannes and now Seoul, where his series Raspberry Time, which she co-wrote with Suzie Bouchard, won Best Miniseries at the 17th Seoul International Drama Awards on Thursday.

Famous for its humanity, its marriage of cultures and languages ​​as well as its highlighting of foreign workers who come from year to year supporting Quebec market gardening, The Last Summers of the Raspberries – its title in English – competed alongside productions such as Sisi (Germany), Station Eleven< /em>(US) and Hotel Portofino (UK).

Following the triumph of her other star-studded series, Audrey returned, at 37esGemini Prize, Florence Longpré and producer Julia Langlois of Trio Orange traveled to South Korea – a 14-hour flight and another of three hours – where the series directed by Philippe Falardeau, available on Club illico, obtained this important distinction . She therefore went from one gala to another, winning prizes in each of the ceremonies, which shows that success sticks to her skin.

It should be noted that Sandrine Bisson, who is the star of the Raspberry Time, was nominated in Seoul for her portrayal of Elisabeth, a mother who inherits the family farm following the sudden death of her husband. She must learn everything, get closer to foreign workers she does not know and, above all, deal with a beautiful family that is not at all convenient. Sandrine Bisson was in the running alongside Jodie Comer for Help. This British actress is best known for her role in the Killing Eve series.

Shining Here and There

“Very impressed” by the strong presence of technology in Seoul, Florence Longpré agrees that her success in Quebec and around the world sheds considerable light on her talent as a screenwriter and actress. “It is special what is happening to me, it is true. I recognize that it's a crazy and wonderful year, but concretely there is still work [to do], it keeps me both feet on the ground.

She does not feel any pressure for the second season of Time of raspberries, the writing of which is progressing – “we haven't finished, but we have a good piece of it!” –, speaking of the happiness of being able to deepen the characters through the humanity of the subject.

“It’s a very human series, deep within our humanity. As much in its ugliness as in its beauty, in its communion and in its incommunication”, she slipped.

Florence Longpré in the company of the producer of Trio Orange Julia Langlois.

She throws flowers to her co-screenwriter Suzie Bouchard and director Philippe Falardeau for the “cinematic touches” added to the series.

Remember that Le temps des raspberries, produced by Trio Orange, closed the Berlinale Series and had its world premiere at the 72nd Berlin International Film Festival.

As for her other series, Audrey returned , produced by Pixcom, it won two prizes at the Cannesseries festival, namely the Grand Prix Dior, an award going to a series in competition that stands out for its originality and innovation, as well as the Special Prize for interpretation, awarded to the entire cast. Audrey is back also won five Gemini this year, for best comedy, best text: comedy (Florence Longpré and Guillaume Lambert), best director: comedy (Guillaume Lonergan), as well as best male and female: comedy (Florence Longpré and Denis Bouchard).

In addition to working with Suzie Bouchard to complete the second season of Time of raspberries, Florence Longpré will soon be filming the second comedy season The Brotherhood. Her fall will also be devoted to thinking about her next project, which she could write solo this time.