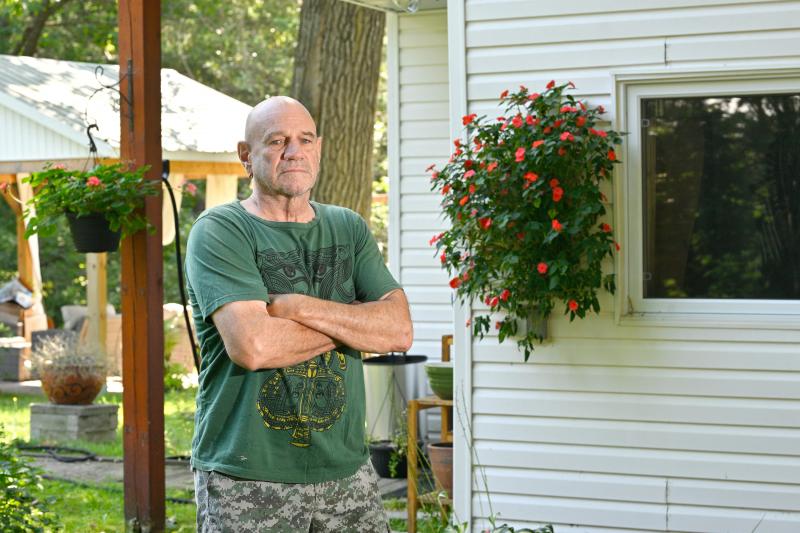 Investors Group has completely lost track of the RRSP of a former Laval policeman who was counting on this money to ensure his retirement.

Richard Daigneault, a former agent of the Service de police de Laval (SPVL), says he was recently informed that the Investors Group did not know what had happened with its savings placed within the group in the 1990s.

“They told me to get a lawyer if I was not happy. Beyond seven years, they told me that they were no longer responsible for the files. And they told me it was my responsibility to follow up on my investments every three years,” he explained. would be 65 years old. I never thought it was lost. I was sure I could get my RRSP in retirement,” he says.

Richard Daigneault readily admits that he fell on harder times after being forced out of the force at age 38 in 1995, and that he didn't always keep a close watch on his finances. < /p>

He admits to having a criminal record for cultivation of cannabis and drunk driving in particular, but has never been involved in a history of fraud. He therefore does not understand why he should put a cross on his retirement savings and swears he has never received a penny.

He currently lives in a modest house in Sainte-Julienne, in Lanaudière.

He says he doesn’t understand how a financial institution can ignore where his RRSP went, from which he swears he never touched a penny.

According to documents that Richard Daigneault submitted to us, two checks from the City of Laval were indeed made out to Investors in November 1995.

“The pension plan office confirms to me that the payment of the two sums, namely $57,148.13 and $7,220.29 was indeed made to Investors in November 1995”, indicated Érika Landry, an agent of public affairs of the SPVL, in response to our Bureau of investigation.

Asked to comment on the situation, Investors Group, which changed its name to IG Wealth Management, limited itself to telling us that “IGM is in communication with Mr. Daigneault on this matter.”

“We have no further comment,” wrote external publicist Lara Berguglia.

►< strong>According to calculations by financial planner Simon Houle of Archer Wealth Management, to whom we submitted the case, an amount of $57,148 that would have been invested in an RRSP in 1995 would be worth $213,360 today. He arrived at this result by making a realistic assumption of a return of 5% per year for Mr. Daigneault.

2013: Richard Daigneault asks Investors for information on his retirement savings and receives some answers .

2022: He is informed that Investors does not know what happened to his RRSP.

Even though he lost all trace of his RRSP, Richard Daigneault managed to obtain some information about another locked-in retirement account (LIRA) that he also held with Investors

According to documents which he obtained from Investors in 2013, his CRI was transferred in 1999 to the National Bank.

En 2000, the sums of this LIRA were then redirected to a firm called First Marathon Securities.

In 1999, the National Bank acquired First Marathon in June for $712 million.

Richard Daigneault swears that he never authorized any transfer of funds from his LIRA.

Our Bureau of Investigation contacted the Investors representative whose name appears on the 1999 statement. This representative, Pierre-Paul Letellier, who is no longer with Investors, told us that he had found a trace about twenty years of
Mr. Daigneault in his records.

He told us that he inherited this client from another representative, Michel Madore, when the latter left Investors.

He told us that he was in charge of him for a very short time and that he was not involved in the transfer of his CRI outside of Investors.

“I think the money is lying around somewhere and you just have to find it. […] I would tend to look,” he told us on the phone.

“The teams confirm that we no longer have any traces of these funds in our systems” , wrote Jean-François Cadieux, spokesperson for the National Bank.

According to planner Simon Houle, of Archer, an amount of $7,220 that would have been invested in a LIRA in 1995 would be worth today $26,965 taking into account Mr. Daigneault's profile.

The AMF invites the ex-policeman to file a complaint

The Autorité des marchés financiers (AMF) said it was surprised at the little information that the ex-policeman Richard Daigneault was able to to have so far from Investors Group.

“It seems difficult to understand how Mr. Daigneault did not succeed in obtaining more information and details from the institutions concerned from the documents produced”, spokesperson Sylvain Théberge wrote to us.

The latter indicated that the AMF can only offer a preliminary perspective in this case.

“We invite him […] to use our complaint form to ensure that he will get written answers. If the process does not prove conclusive, he can request the transfer of his file to our complaints handling department, which can then examine it and assess whether an intervention is possible,” he added.

According to AMF spokesman, Richard Daigneault would also do well to contact Michel Madore, a former Investors adviser whose name appears in a 1995 document on the transfer of his retirement savings.

< p>The latter is currently registered with the AMF as a broker's representative.

“File dating back more than 25 years and seized by regional director of Investors Group Daniel Gagné in 1997. No trace of my side,” he wrote to us. Contacted, Daniel Gagné referred us to the legal department of Investors.

ADVICE FOR MONITORING YOUR INVESTMENTS:

■ As soon as you receive your first statement, ask your adviser to explain it to you;

■ After each investment, consult the statement to check if everything appears as expected;

■ Update with the advisor once a year;

■ When an account is inactive, institutions can transfer the balance to Revenu Québec's unclaimed property register;

■ Seven years after the account is closed, the related documentation may be removed by the financial institution.