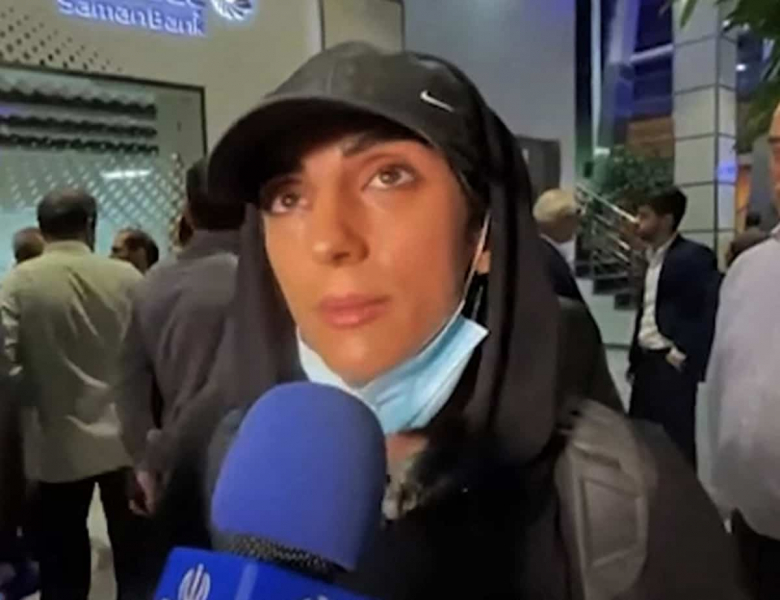 Iranian sportswoman Elnaz Rekabi, who had participated without a veil in a climbing competition in South Korea, returned to Tehran on Wednesday, greeted like a hero by her supporters at the airport.

His participation in the Asian climbing championships, wearing only a bandana on his head, had been interpreted as a gesture of solidarity with the demonstrations sparked a month ago by the death of the young Iranian Kurd Mahsa Amini.

The Islamic Republic indeed imposes on Iranian sportswomen, even in competitions abroad, to wear the veil, compulsory for all women.

Twice since Tuesday, 33-year-old Elnaz Rekabi has issued an “apology” and explained that her headscarf slipped off by mistake. But human rights activists considered that these declarations, in front of the press and on social networks, could have been obtained under pressure.

“Elnaz is a heroine”, “Bravo Elnaz”, shouted dozens of people massed Wednesday morning in front of the terminal of Imam Khomeini airport in Tehran to welcome the young woman to applause and cheers, brandishing mobile phones to film the scene.

The crowd, where there were women not wearing the veil, surrounded a van and a car where the sportswoman would have taken place. The two vehicles left the airport for an unknown destination, still to applause.

“A welcome worthy of a heroine, including from women without the compulsory veil, outside Tehran airport for the sportswoman Elnaz Rekabi. Concerns remain for his safety,” commented the NGO Center for Human Rights in Iran (CHRI), based in Iran.

Dressed in a black hooded jacket and a baseball cap, Elnaz Rekabi was greeted at the terminal by her relatives, before addressing the media.

“Due to the climate that prevailed during the finals of the competition and the fact that I was called to start when I did not expect it, I found myself entangled in my technical equipment (…). Because of that, I didn't pay attention to the headscarf I should have worn,” she said.

“I returned to Iran in peace, in perfect health and according to the planned program. I apologize to the people of Iran for the tensions created,” she said, adding that she “does not intend to say goodbye to the national team.”

But the Islamic Republic has several times been accused of provoking forced confessions or statements. The British actress of Iranian origin Nazanin Boniadi, ambassador for Amnesty International in the United Kingdom, estimated that the sportswoman had been “forced to make this declaration by the authorities, customary of forced confessions on television”.

Observers “should not be influenced by state propaganda,” CHRI stressed.

Iranian journalist in exile Maziar Bahari described the statements of the young woman as a “forced confession”. “You can see the fear in his eyes. She is only repeating what she has been told,” he wrote on Twitter.

Amnesty International stressed that the young woman was back “at risk of arbitrary arrest, torture and other ill-treatment”.

Already on Tuesday, the sportswoman had presented on Instagram “apologies for the concern” that she may have caused and assured that the decision to remove her veil does not was “unintentional”.

Human rights defenders outside Iran had expressed concern over her fate, with several of her friends saying they could not reach her.

Iranian Embassy in Seoul denied “all false information and misinformation” about her situation and said she left South Korea with her teammates on Tuesday.

Elnaz Rekabi wore a bandana during the bouldering event and a headband showing her hair in a second event, according to footage released by the International Climbing Federation.

The competition, where she placed fourth, took place on Sunday, one month to the day after the death at age 22 of Mahsa Amini, arrested on September 13 in Tehran by the morality police who accused her of having violated the Islamic Republic's strict dress code for women, foreseeing especially the wearing of the veil.

Sport has become an extremely sensitive subject in Iran since the recent protests, with several prominent Iranian sportswomen speaking out in favor of women's rights.