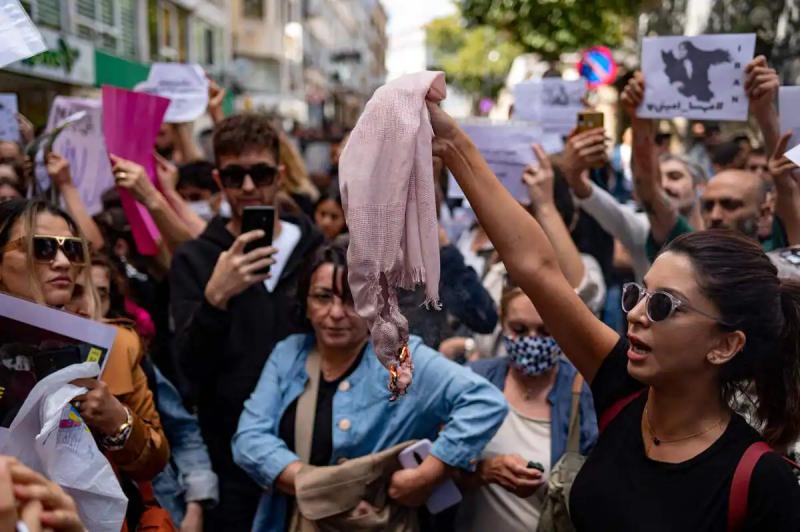 Two more demonstrators were killed in Iran during protests overnight from Tuesday to Wednesday, according to a human rights group, as demonstrations increase in the country after the death of a young woman detained by the morality police.

Mahsa Amini, 22, from the Kurdistan region (northwest), was arrested on September 13 in Tehran for “wearing inappropriate clothes” by the vice police, a unit responsible for enforcing the dress code. strict in the Islamic Republic. Women are required to cover their hair, and the morality police also prohibit them from wearing short coats above the knee, tight pants, jeans with holes as well as brightly colored outfits, among others. /p>

The young woman, whose first name in Kurdish is Zhina, fell into a coma after her arrest and died on September 16 in hospital, according to state television and her family. This affair provoked a wave of anger in Iran and strong international condemnation, in particular from the UN, the United States and France.

The demonstrations continued for the fifth consecutive night in the streets of about fifteen Iranian cities. Angry demonstrators blocked traffic, set fire to garbage cans and police vehicles, threw stones at security forces and chanted anti-government slogans, according to the official Irna news agency.

Police used tear gas and made arrests to disperse the crowd, the agency said. Men and women, many of whom had removed their headscarves, gathered in Tehran and other major cities across the country, according to the same source.

The protests take place at night as they are organized in the evening after work.

A woman cuts her ponytail during a protest outside Iran's consulate in Istanbul following the death of an Iranian woman after she was arrested by the country's vice police in Tehran.

According to the Hengaw human rights association, six people have been killed in total since the beginning of the protests repressed by the police: two in Divandareh, and one in four other cities, Dehgolan, Saqqez, Urmia, and Piranshahr .

Iranian Telecommunications Minister Issa Zarepour on Wednesday raised the possibility of restrictions on internet access in the country during the protests “due to security concerns”, he said, quoted by the news agency. ISNA.

“It is unfortunate that some countries are trying to take advantage of an incident under investigation to pursue their political goals and desires against the Iranian government and people,” he said.

< p>Video filmed in the southern city of Shiraz shows security forces opening fire on participants in protests that continued into the early hours of Wednesday morning.

The protests now appear to have spread across the country, including the holy city of Qom, the birthplace of Iran's Supreme Leader Ali Khamenei — who spoke at an event in Tehran but without any mention of demonstrations.

Other video images show demonstrators responding to security forces by snatching tear gas canisters from security forces and preventing them from making arrests. One of the main viral trends on social networks is to see women setting their headscarves on fire.

These protests constitute “a very important shock” in Iran, “it is a societal crisis” , David Rigoulet-Roze, associate researcher at Iris, specialist in Iran, told AFP “It is difficult to know the outcome but there is a disconnection between the authorities blocked on their DNA from the Islamic Revolution of 1979 and an increasingly secularized society. It is a whole social project that is called into question. There is a hesitation among the authorities on the procedure to follow with regard to this movement, ”explained the researcher.