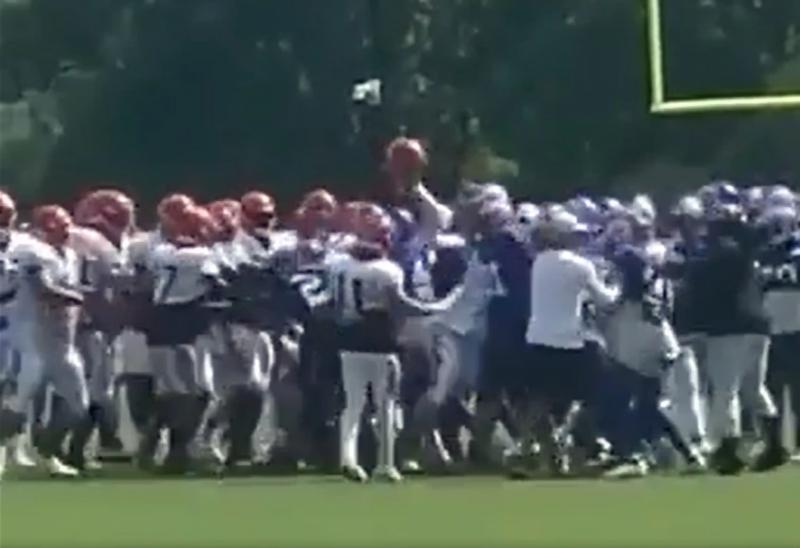 Tempers ran high during a joint Los Angeles Rams and Cincinnati Bengals practice on Thursday, and defensive lineman Aaron Donald even ripped the helmet off two opponents' heads before using them to land blows.

The whole scene was captured by a camera in the distance. In the video, the star player of the Rams can be seen dealing blows with the helmet of an opponent, while a scrum formed around him, before being thrown to the ground.

“There was a little too much hustle and bustle, so we preferred to finish it at that time,” Bengals head coach Zac Taylor told the NFL website after practice. We were in the last period. We had two good days of training.

“Would it have been worth it to make the last games anyway? No. So we concluded the training like this.”

The reasons for this fight are still unknown. The Rams and the Bengals know each other quite well, however, as they were the two teams in action at the last Super Bowl, won by the Californian team.

In addition, this scene is reminiscent of the one involving Myles Garrett of the Cleveland Browns and Mason Rudolph of the Pittsburgh Steelers.

During a season game between the two section rivals in 2019, the former ripped off the latter's helmet before to hit him on the head with the skull protector. Garrett had inherited an indefinite suspension and ultimately missed six games for his gesture.

In Donald's case, a suspension doesn't appear to be in the cards according to the NFL Network since the joint workouts are the responsibility of the teams – not the NFL.