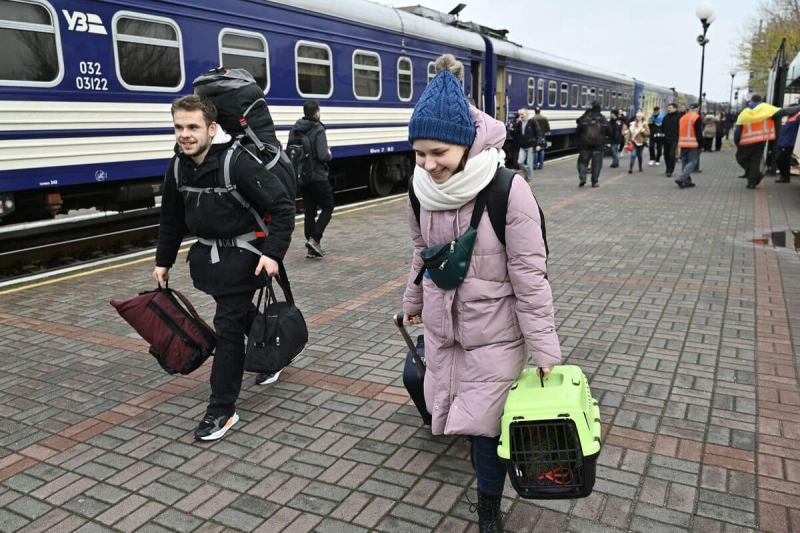 Tears, smiles and sporadic artillery fire surround the return of residents on the first train arriving in Kherson in eight months, where families separated by war and Russian occupation have found on Saturday in this city in southern Ukraine.

Ukrainian authorities announced on Friday the reopening of the train line between the capital Kyiv and Kherson, a week to the day after the withdrawal of the Russian army from the city.

“I promised I would come back. It happened, so I kept my promise,” says Anastasia Shevlyuga, 30, after getting off the train and reuniting with her mother.

For other people, this moment is more difficult.

Svytlana Dosenko fights back tears for a moment as she waits to see her only son, whom she last saw before the war with Russia began in February.&nbsp ;

The wait has been very difficult. “I only have him,” she exclaims.

Her past eight months have been marked by grief, humiliation and fear since the Russians occupied vast territories on Ukraine's Black Sea coast, including Kherson.

Two days into the war, on February 24, Svytlana's husband died of COVID after the electricity went out at the hospital where he was placed on a ventilator.&nbsp ;

In the months that followed, she lived under occupation by Russian forces, who carried out frequent searches of apartments and set up checkpoints throughout the city.

“It was very difficult. My house was searched by Russian soldiers” who were looking for “weapons”, she said.

Svytlana plans to take the train on Saturday evening to return to Kyiv with her son.

“I want, she said, just to see him and tell him that I love him”.

On the quay, a few steps away, Lyudmila impatiently awaits the arrival of her granddaughter, holding a bouquet of flowers.

“Her parents in Kherson don't know she's coming…we organized it,” she told AFP, laughing. “We are finally free! “.

“It's a win-win. We have been liberated and my favorite child is coming here,” says Lyudmila.

Other people came to the station on Saturday simply to take part in this event symbolizing the return of Kherson to Ukrainian control.

“I wanted to make sure it was going to happen,” says Lyudmyla Smeshkova, 60, whose chihuahua Molly sticks out of her fur jacket.

For railway workers in the region, the arrival of the Kyiv-Kherson train represents a huge moment of pride.

More than 100 workers worked tirelessly under cold rain last week to clear and repair nearly 60 km of track with mine clearance teams.

“It's emotional. After hearing about the liberation of Kherson, we were ordered to repair 58 different damaged places on the line,” says 31-year-old Denys Rustyk, a railway worker from nearby Odessa.

< p>In Ukraine, railways have long been the industrial and economic backbone of the country. Since the beginning of the war, they have been a real lifeline for the country, allowing in particular the evacuation of millions of people fleeing the conflict.

The reopening of the line to Kherson must also provide a another crucial supply route for the city which is in desperate need of humanitarian aid.

As they withdrew, the Russians destroyed essential infrastructure in Kherson, leaving the city ​​without water and electricity as a harsh winter sets in.

Since then, humanitarian aid has been pouring in by trucks and cars using the damaged road linking Kherson to the neighboring city of Mykolaiv.

The return to service of the Kyiv-Kherson line “is of vital importance” because the city will be able to receive aid by train, says a railway worker, Yuri Karlyukin, 53.

“The sooner Kherson is connected, the sooner the city will revive”.