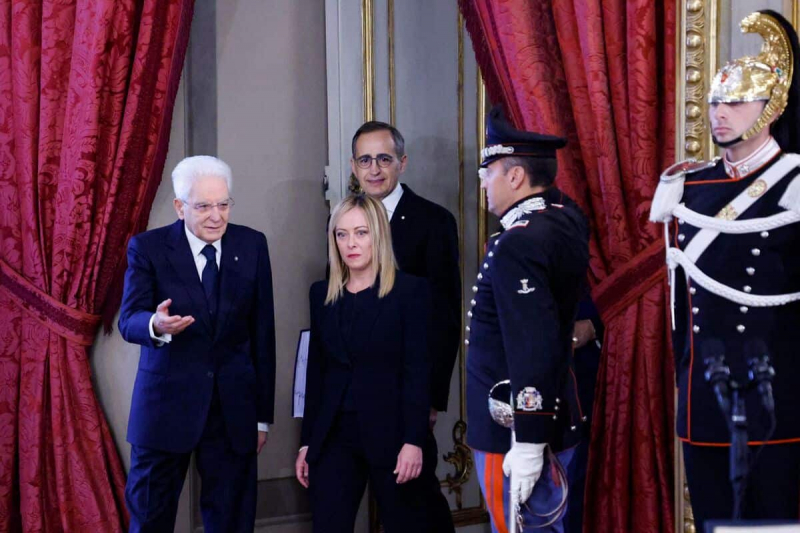 New Prime Minister Giorgia Meloni and her ministers, who have formed Italy's most right-wing and Eurosceptic government since 1946, were sworn in Saturday morning at the presidential palace of the Quirinal in Rome.

The ceremony under the gold of this palace overlooking Rome, residence of the popes and kings of Italy before becoming the seat of the Presidency of the Republic, took place in presence of the Head of State, President Sergio Mattarella.

Ms. Meloni, dressed in a very sober black suit, was the first to take the oath, followed by her two Deputy Prime Ministers from the two partner parties in her coalition, Matteo Salvini, the leader of the Antimigrant League, and Antonio Tajani , senior official of Silvio Berlusconi's Forza Italia party.

All followed one another in front of Sergio Mattarella to pronounce, standing, the traditional oath: “I swear to be faithful to the Republic, to loyally respect the Constitution and the laws, and to exercise my functions in the exclusive interest of the nation”.

The list of ministers chosen by Mrs. Meloni, who with her post-fascist party Fratelli d'Italia won a historic victory in the legislative elections of September 25 with 26% of the vote, reflects her desire to reassure Rome's partners, worried about the rise to power in Italy of a far-right head of government.

Another pledge given to Brussels is Giancarlo Giorgetti, a representative of the moderate wing of the League, already a minister in the government leaving Mario Draghi, who inherits the crucial portfolio of the Economy.

The populist Matteo Salvini must be content with the portfolio of Infrastructures and Transport while he coveted the more prestigious one of the Interior, falls to a technocrat.

Of the 24 ministers only six are women, confined to minor portfolios.

The transfer of power between Mario Draghi and Giorgia Meloni will be held at 8:30 a.m. GMT on Sunday at Chigi Palace, the seat of government two pa s of parliament, and will be followed by the first Council of Ministers.

This essentially ceremonial stage will be marked by the symbolic handing over by Mr. Draghi to Mrs. Meloni of the bell used by the President of the Council to regulate the debates in the Council of Ministers.