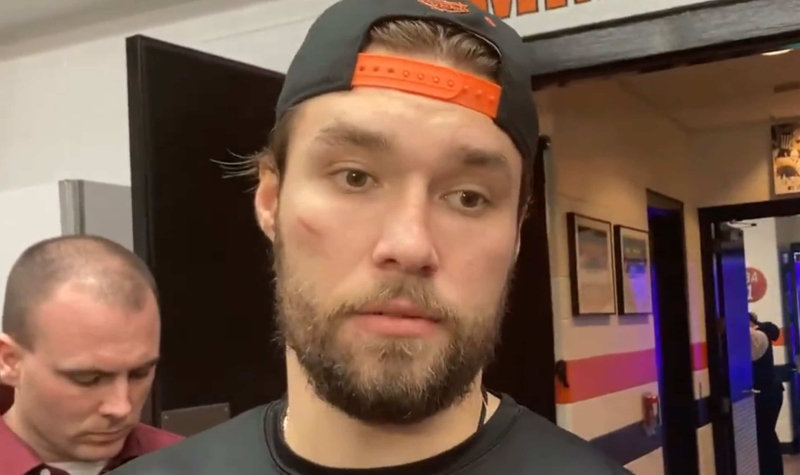 The National Hockey League (NHL) reacted to Philadelphia Flyers defenseman Ivan Provorov's refusal to wear a rainbow jersey on Tuesday night, arguing that league players had the freedom to support or not its initiatives.

The 26-year-old was the only player not to wear the team's special jersey during warm-ups, preferring to stay in the locker room as the Flyers held their annual Pride night. His decision caused a lot of talk on social media, with some even asking head coach John Tortorella to bench Provorov.

In front of the media after the match, the Russian explained that he had done this because of his faith in the Orthodox religion. On Wednesday, the NHL came to the defense of the hockey player.

“'Hockey is for Everyone' is an umbrella initiative under which the league encourages teams to celebrate the diversity that exists in their respective markets, and which works to build more welcoming and inclusive environments for all fans. The teams decide what to celebrate, when and how, with the agreement and the support of the league,” she said in a press release.

“Players are free to decide which initiatives they support, and we continue to encourage them to share their opinions and views on social and cultural issues.”

“We do steps forward with all these initiatives and we're starting to show good signs of improvement within the game, and then people are using their platform to attack this and say you're not welcome here “, mentioned the one who revealed his sexual orientation in November 2020.

In a press briefing after the meeting, Provorov said he “respected everyone's choices”, but that he preferred to be faithful to his religious convictions. This comment particularly hit Pettinger.

“It’s not a choice. It was not a choice for me to be gay, it is how I was born and it is my identity. I have to live with that. A choice is something where you have options, but I had to do this to ensure my happiness, my success and my continuity within the game of hockey.”

Forwards James van Riemsdyk and Scott Laughton have been featured in Flyers advocacy campaigns for LGBTQ+ rights. They launched a support program in Philadelphia and met with more than 50 people from the community before the meeting.

Laughton said he would try to discuss the matter with Provorov, but he had nothing to reproach him for.

“I don't blame anyone. It is none of that. It was a great night and I'm happy that we won this game,” he said on Tuesday night, sidestepping the hot topic a bit.

Flyers defenseman Ivan Provorov on refusing to wear a rainbow jersey for warm ups during “Pride Night” due to his Russian Orthodox faith.
pic.twitter.com/wCUl8slmRB