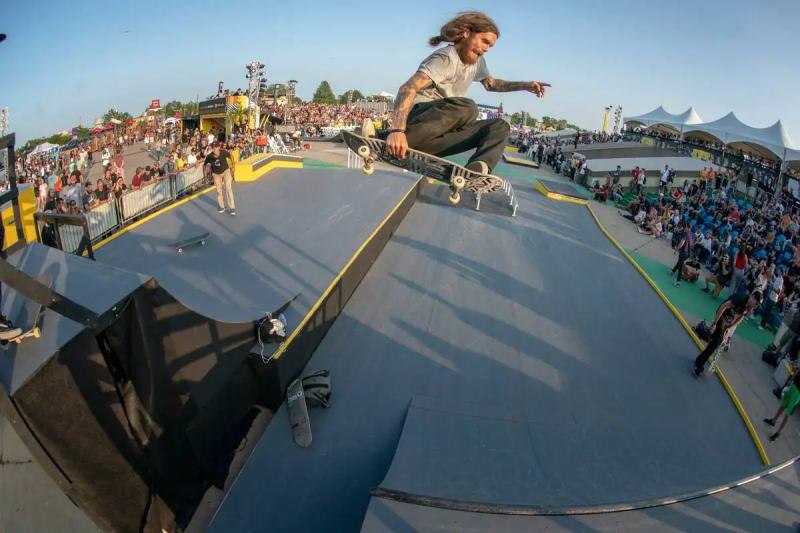 After two years of cancellation due to the pandemic, the Jackalope festival will celebrate its 10th anniversary in style in 2022, from Friday to Sunday on the Esplanade of the Olympic Park.&nbsp ;

True to form, the extreme sports event will showcase disciplines such as skateboarding, BMX and bouldering, three events that have also made their debut at the last Olympic Games, in Tokyo.

“We are excited because this is a very important year,” launched the founder and president of the event, Micah Desforges, at the end of the line on Tuesday.

This year, the Montreal event will also feature a breakdance competition, another discipline that will join the list of competitions at the Olympic Games in Paris in 2024.

“What's 'cool' about breakdancing is something that still ages well. It's always captivating to see people dancing, added Desforges. Maybe the general public doesn't know it, but we have a strong culture of breakdancing in Canada and Montreal, inspired by New York and elsewhere in the world.”

“It's a universe which deserves the “spotlight”, because we have deep roots, since the 1980s, in Montreal, of an “underground” culture.”

A good dose of adrenaline< /strong>

Although the festival is aimed at all the curious, the experience will be particularly interesting for adrenaline seekers, who will be able to see BASE Jump experts at work.

Similar to a parachute jump, however, jumpers do not launch from an airplane, but rather from a building, a high-altitude antenna, a bridge or even from the top of a mountain.

In the past, BASE Jump athletes could dazzle by jumping from the top of the Olympic Stadium tower. The renovation projects taking place there, however, have thwarted the plans of the organizers of the Jackalope.

“This year, the tower is under construction, said the president of Jackalope. As we do not like to be told no in life, we said: “we will find a solution”. We rent the largest construction crane in Canada, then we park it on Sherbrooke Street. We have to close two lanes out of three, eastbound, to [park] a crane so [big] that it needs another one to install it.”

The jumpers will thus launch from the top of the crane, on a platform 90 meters above the ground. Plus, one of only two jumpers in the world with the experience and certification to do tandem jumps will be on hand. Andy Lewis will thus allow a dozen lucky people to live a high adrenaline experience.

“We have people who have experience, who have a great pair of balls. And we have “crinqués” who want to live this experience, to be attached to one of these athletes and to live the adrenaline dose of their life, ”added Desforges.

Immersed in the world of extreme sports that will be presented at the 2022 edition of the Jackalope, the president and founder of the event, Micah Desforges, had no choice but to watch the Olympic Games. He was, however, disappointed with the introduction to skateboarding, rock climbing and BMX.

“I was happy to see her, but it seems like without the crowds in the stands, the competition happened at 9 a.m. There was something not very authentic,” said Desforges.

“It was an introductory year, let’s call it that. It wasn't a false start, but pretty much taking into account the pandemic, the in-village experience for athletes that was non-existent, and the lack of a viewing party. There were no celebrations of the Games in general, it felt on the screen.

The businessman expects, however, that the craze will go up a notch in Paris, in 2024, before reaching its peak in Los Angeles, in 2028.

“The entrance was Tokyo, the “fun” will start in Paris [2024], but the party will end up in Los Angeles [2028]. LA, with surfing and [extreme sports] culture. It's in our backyard, as Canadians and Quebecers. We look at 2028 as the year of the explosion of marginalized sports in recent decades. They will begin to take an increasingly important part in the “mainstream”. I believe that skateboarding has the potential to become one of the most popular sports in the world and possibly rank in a top 3, along with soccer.”

When he saw, on television, in 1999, the legendary skateboarder Tony Hawk achieve the first 900o in history on a skateboard, at the X-Games, Micah Desforges knew immediately that he would work in this field later.

“For me, it was a flash of revelation that I had to say to myself “it does not matter if you fall several times, the important thing is to get up”, he mentioned, joined at the end of the line, Tuesday. These are great values ​​to communicate to young people.”

More than two decades later, including one at the head of the Jackalope, Desforges has built a flagship event in the discipline, in addition to having had the chance to meet his idol. Indeed, Hawk passed twice rather than once in Montreal, including the first in 2017, as part of the festival.

“When I saw Tony Hawk, the first time, at the airport , to pick it up, I flipped over. We couldn't believe it.”

Cirque du Soleil as a model

Sign that Jackalope is successful, the concept will cross the Canada-US border in 2023 to hold a festival in Virginia Beach. The founder does not intend to stop there.

“It hasn’t been a “one-man army” for a long time. The first year, I had the radio in my neck, my mother almost helped me to make sandwiches. It was very small in 2012, it was ridiculously small compared to what it is rendered.”

“There, we create a copy, we adapt it, we make a Jackalope Virginia Beach. Then we will do one in Europe, one in Asia, one in Latin America. At some point, there will be a circuit of Jackalope festivals, qualifying events, year-round content. The goal is to become a Cirque du Soleil of adrenaline.”

Desforges also appreciates the business model of the company, which was born in the Belle Province, and he intends to draw inspiration from it.

“I love the Cirque du Soleil model, which is to create something in Montreal and export it. I love the creativity and talent we have in Quebec. We feel that we have a vein, something, and it is a team success. The best is yet to come.”