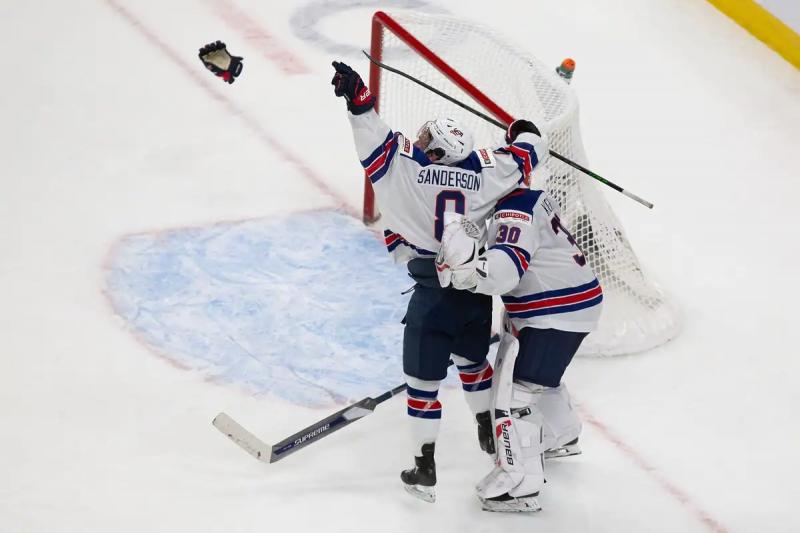 BUFFALO | Jake Sanderson and Shane Pinto both told the same anecdote. A few hours before their first game at rookie camp in the sumptuous city of Buffalo, the two hot Senators prospects relaxed with a stroll near the LECOM Harborcenter.

“We have walked by the water in Buffalo without saying a single word to us,” Pinto said with a big smile on his face. We were a little nervous. But after my first appearance, I remembered that it was still hockey.

“We went out to kill some time, but we weren't talking to each other,” Sanderson chimed in.

Pinto and Sanderson, two players from the United States, are good friends despite the silence that reigned between them. They are also two of the Senators' main prospects, one at center and the other as a defenseman.

They also have another point in common, that of returning to the game after a long absence. With a dislocated right shoulder, Pinto missed the Senators' final 68 games of his rookie season last year in the NHL.

Sanderson, meanwhile, is recovering from two one-handed surgeries. The fifth overall pick in the 2021 draft appeared in just 23 games during his last campaign at North Dakota University.

Pinto and Sanderson both donned the uniform of the Senators in Team Ontario's first game at rookie camp on Friday against the prospects of the Boston Bruins.

“In general, I felt very good,” noted the Senators' 2019 2nd round pick. There are still some things I would like to improve, but it was good. I didn't feel any pain in my shoulder. I was happy.

“I hadn't played a game in almost six months, so the pace of the game was the biggest challenge,” added Sanderson. Despite that, I was happy to be back on the ice. I will need volume now, but it will happen at camp. »

Pierre Dorion and the Senators shaped the image of the team over the summer with the acquisitions of Alex DeBrincat from the Chicago Blackhawks and Cam Talbot from the Minnesota Wild, but also with the signing of Claude Giroux on the free agent market.

The Sens will also need the contribution of their young players to take the next step, that of becoming a team capable of making the playoffs. Pinto and Sanderson will have important roles.

On paper, Pinto should be the team's third center behind Tim Stützle and Josh Norris, while Sanderson will be a regular on the blue line. But Geoff's son, the former Hartford Whalers forward, has his eyes set on an even bigger role. affirmed. I would love to play with the big boys and get a top four role. I have confidence in my game.

“I want to become a pillar on the blue line of our team. I would like to be the player who jumps on the ice at the end of the game when we lose by a goal or we lead by a goal. »

In Ottawa, Thomas Chabot is without a shadow of a doubt the number one defenseman. After the Quebecer, however, it is quite thin with Artem Zub, Nikita Zaitsev, Travis Hamonic and Erik Brannstrom. D.J. Smith and the Sens will quickly make way for Sanderson, a very agile skater and a gifted defender to get the attack going again.