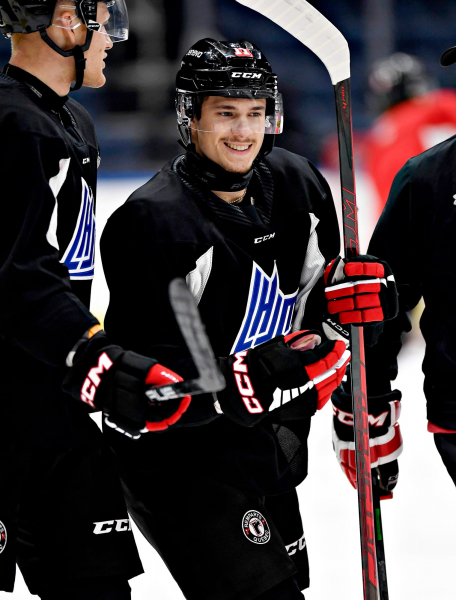 James Malatesta has two goals: sign a professional contract with the Columbus Blue Jackets and lead the Quebec Remparts to great honours. If he continues on his good start to the season, another feat of arms could be within his reach, believes his trainer Patrick Roy.

The 19-year-old forward has scored nine goals in 10 games so far this season and, with 13 points, he shares the Remparts scoring lead with Pier-Olivier Roy, Théo Rochette and Nathan Gaucher.

Beyond the points, Malatesta also made his presence felt physically on several occasions.

“He's got a big start to the season and I hope the folks at Hockey Canada are watching him. The way he's playing right now, he deserves at least an invitation to camp for the World Junior Hockey Championship. I'm happy with what I see from him. He is an intense guy who works hard. I've talked to people from the Blue Jackets and James is one of those who came in with the right mentality, he was ready when he came back here,” Roy said.

Mis At the scent of the words of his head coach, Malatesta sketched a smile.

“I try not to think about it too much. I want to play and have fun and keep going. This year, I am playing for a contract and to win a championship with the Remparts. I play for a lot. I'm really motivated and I think it shows on the ice.”

After hearing Roy's remarks about Malatesta, a colleague relaunched the Remparts head coach by asking him if he didn't believe that goalkeeper William Rousseau, too, could earn an invitation with the Canadian team with the start. season he knows.

“There are several players on our team who deserve a call [from Hockey Canada], that’s for sure. It is not me who will stop the promotion of our players. Will is having a fantastic start to the season. […] What worried us was that it was the first time he had the role of no. 1. Honestly, we will admit that he deals very well with that. Pascal Lizotte [the Remparts' goalkeeper coach] is doing a very good job of preparing him mentally and technically, he doesn't give a lot of rebounds.”

In nine games this season, William Rousseau has a 1.67 GAA and a .937 save percentage.

“I have a good start to the season but I never want to be satisfied. I like to think that you never reach perfection so you always have to improve. The team plays with more responsibility defensively. It happens that we give chances, like any club, and it's up to us, the goalkeepers, to make those saves,” said the one who benefits from the mentorship of Patrick Lalime, a “knowledge enough close”.

“He talks to some people on a professional level and he gives me reports.”

Quentin Miller, the only hidden hope of the QMJHL

Only one QMJHL goaltender was listed on the NHL Central Scouting preliminary list, released Tuesday: Quentin Miller, of the Quebec Remparts.

The 6 ft Montreal goaltender, 3 in & 180 lbs rated “C” on the recent survey, which means he's considered a rounds four through seven prospect for the upcoming NHL Draft, June 28-29, in Nashville.

“I found it fun to have recognition for my work. It's special to be on an NHL roster, but it doesn't change anything for me. I have to keep working hard and that doesn't change my game plan,” reacted this morning the French-speaking man, whose first name is pronounced “Cantin”.

In his first season in the QMJHL, Miller does not necessarily find himself in an environment conducive to promoting himself, night after night, with recruiters.

The Remparts use a rotation behind starting goaltender William Rousseau, between Philippe Cloutier and him.

The plan is to share the weekends relatively fairly between the second two. After playing in Charlottetown last Saturday, Miller will make way for Cloutier next weekend.

“It's not always easy, but it allows me to learn from the other two, who are very good guards. I can take advantage of this situation. ”

Among the advantages he derives from it, Miller admits to learning a lot from the start of the season that Rousseau has experienced until now.

“ He is a goalkeeper who is able to bring his body into the washers. He is very focused and works hard. I see how much you have to be hardworking, focused before each match and take the right steps to prepare. I learned from William how to be a good athlete. »

According to Patrick Roy, the interest of the teams of the NHL is there for the Rousseau-Royal product from Laval-Montreal.