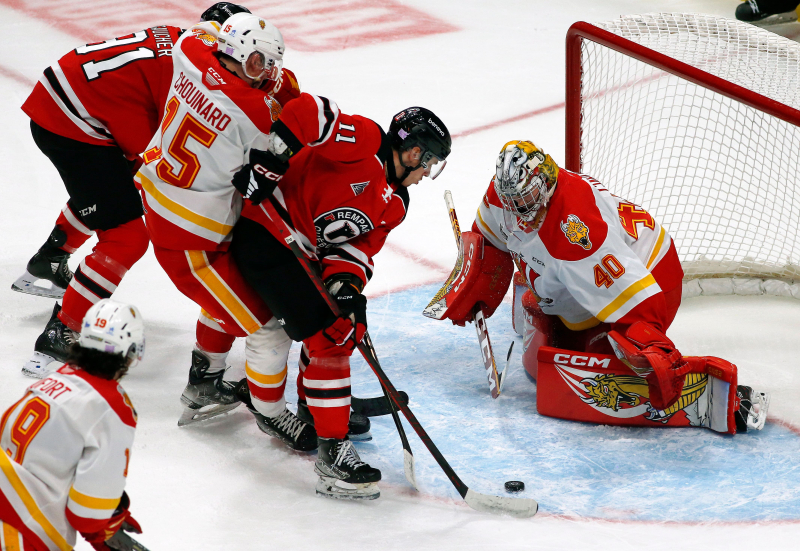 The Remparts had to work hard against a tough Baie-Comeau Drakkar on Sunday, but a goal by James Malatesta in overtime allowed Patrick Roy's squad to extend their winning streak to 12 with a 2-1 win.

Malatesta jumped on a rebound after 1 min 29 s of overtime, scoring his 14th of the season at a Videotron Center from where still emanated subtle hoppy scents reminding us that, the day before, Luke Combs had put on a show.

Zachary Bolduc opened the scoring for the Remparts in the second, but the Drakkar forced overtime late in the third period when Alex-Antoine Yargeau accepted Vincent Collard's pass to beat Philippe Cloutier.

“Once again, we had a slow start to the game and we will have to be more ready than that on Wednesday [for the visit of the Sherbrooke Phoenix]. The important thing is to find a way to win and that's what we did tonight [Sunday],” said Bolduc, named the first star of the game.

The Remparts could have put the game out of reach of the Drakkar thanks to their strike force on the power play, but they were unable to take advantage of it on seven occasions, coming up against the tight play of the Drakkar and goalkeeper Olivier Ciarlo, author of 36 saves in the loss.

“They played a strong game,” conceded Malatesta. We had chances, but we didn't score. When we have chances, we have to take advantage of them, especially against the stronger teams in the league. We must continue to control the puck and the game will open. »

In the Drakkar camp, even if the end result had a bitter taste, head coach Jean-François Grégoire said mission accomplished.

“We shouldn't have opened the game and we closed it. We managed to kill seven shorthanded people, including five against three. The guys were in the game plan for 60 minutes and they didn't cheat. »

In the end, the Drakkar offered two solid oppositions to the first team in the general classification, after Friday's 5-3 loss, in which they had taken a 2-0 lead. What was the key, for the North -Coastal?

“If you reopen, you're done”, says Grégoire without hesitation.

As simple as that!

A SEQUENCE ? WHICH SEQUENCE?

If we want to extrapolate further, we could even tell you that if they maintain this pace, they are on track to finish with 125 ranking points, which would be the highest harvest in the history of the QMJHL .

Oh, and by the way, we might point out that they have the second-best record in the entire Canadian Hockey League, behind the Winnipeg Ice, who dominate the Western Hockey League with a record of 18 wins and only one loss. .

“I don't watch that. Everyone talks about it and it's funny, but it interests me more or less. Every day, for me, is a new day. I go back to the arena and I focus on what we can do as a group of coaches to improve the team and give them the tools they need to perform. I don't even hear the players talking about it. »

The Remparts will now face their biggest test of the season, one they have been waiting for several weeks, when the Phoenix de Sherbrooke, second overall, will visit the Videotron Center on Wednesday night.

The Phoenix lost 3 to 1 against the Rimouski Océanic on Sunday, and are five points behind the Devils red at the top of the QMJHL.

For Roy, it is still too early, however, to talk about a barometer game.

“We can't wait to see this game. Is it a barometer match? It's a little early, but that'll give us some indication. In the end, it is possible that it will be a team that will always be standing. It will be up to us to continue to work in the process and see how we will behave against a team that is trailing us in the standings. »