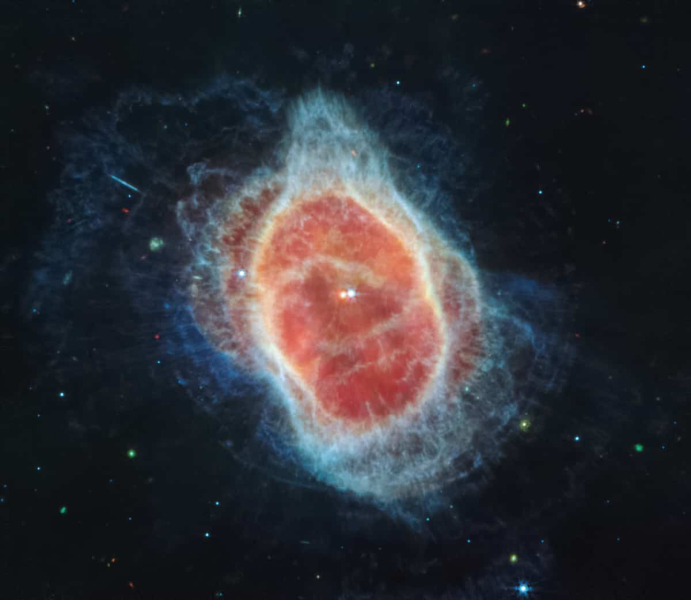 This is one of the first discoveries from the James Webb Space Telescope: two previously hidden stars have emerged from the Southern Ring Nebula that surrounds a star at the end of its life, thanks to observations of unparalleled precision.

This strange nebula located in the Milky Way, about 2000 light years from the solar system, is a gigantic cloud of gas and dust produced by a star which, as it dies, expels some of its material – a lot of gas and a little of dust.

In the center, there remains the heart of this star, called a white dwarf: a very hot and very small star, difficult to see directly, but whose presence can be guessed thanks to the orange rings all around, traces of the matter it ejected . In a few billion years, our Sun should experience roughly the same fate, as the vast majority of stars.

Except that unlike the Sun, which will die alone, the white dwarf in the heart of the Southern Ring nebula is accompanied. We knew so far a “companion” star, easier to observe than the white dwarf, because it is still in the prime of life. It is this companion star that appears brightest in the center of the dusty disk, in the photos taken by the James Webb telescope, which has been operating since this summer 1.5 million kilometers from Earth.

< p> But this duo operation, fairly classic in the Milky Way, did not explain the “atypical” structure of the nebula, explains to AFP Philippe Amram, from the Marseille astrophysics laboratory, one of the authors of the study published Thursday in Nature Astronomy and which dissects the recent observations of the telescope.

“Since its discovery by astronomer John Herschel (in 1835, editor's note), we wonder why the Austral Ring nebula has such a bizarre shape, not really spherical”, rather elongated, continues this CNRS researcher.

The James Webb observations clear up the mystery: thanks to their vision in the infrared, a wavelength invisible to the human eye, the telescope's instruments have unearthed proof of the presence of minus two other stars within the nebula.

These discovered stars lie at the center of the nebula, which extends over a diameter equivalent to 1500 times the distance from the Sun to Pluto. They are farther from the white dwarf than the companion star, but overall the four stars are close enough to each other to interact. between this group of stars which “will shape in their wake” the structure of the nebula, according to the astrophysicist. Which would finally explain its unique appearance.