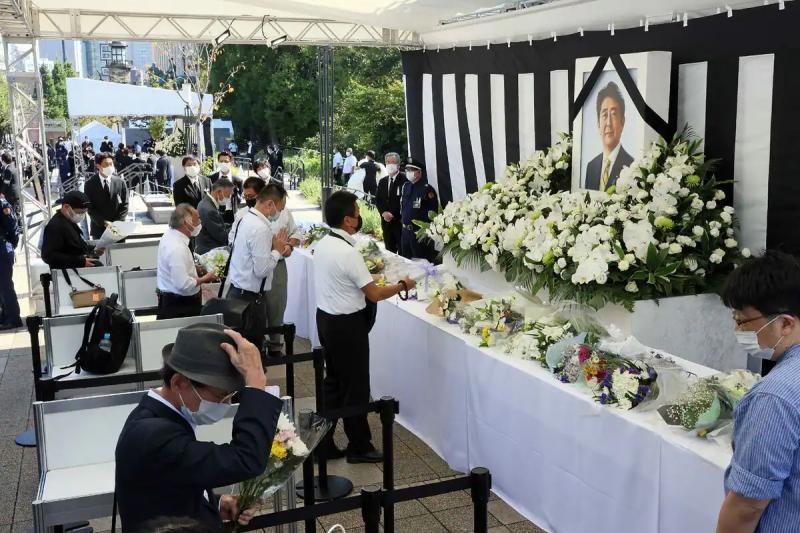 Thousands of Japanese paid their last respects on Tuesday morning to their assassinated former Prime Minister, whose state funeral scheduled for the day in Tokyo is however very controversial in the country.

Many ordinary citizens lined up to lay wreaths and briefly pay their respects before a portrait of Abe installed in a tent near the Nippon Budokan, a mecca for martial arts competitions, concerts and official ceremonies in the heart of the Japanese capital, where the national funeral was to start around 2 p.m. local time.

“I wanted to thank (Abe, editor’s note). He did so much for Japan (…) and the way he died was so shocking,” Koji Takamori, a 46-year-old entrepreneur who came expressly from the island of Hokkaido (north of the Japan) with her 9-year-old son.

“But to be honest, I also came because there was so much opposition” to this state funeral, he added.

This event is indeed far from being a moment of sacred union in Japan, having sparked intense controversy and protests in recent weeks.

He was Japan's best-known political figure both at home and abroad, with his intense diplomatic activity and his massive fiscal and monetary stimulus policy dubbed “Abenomics”.

His assassination by bullets in the middle of an electoral meeting on July 8 at the age of 67 shocked Japan and the whole world.

But Abe was also reviled by many for his ultraliberal and nationalist views, his desire to revise the pacifist Constitution Japan and its proximity to numerous political and financial scandals.

The motive of his alleged killer – Abe's supposed ties to the Unification Church, nicknamed the “Moon sect”, accused of exerting heavy financial pressure on its members – has further tarnished the image of Abe. the former Prime Minister in the eyes of his detractors.

Since his death, revelations have continued to rain down on the extent of the links between this Church and Japanese parliamentarians, especially from the Liberal Democratic Party (PLD, right in power), formerly led by Abe and today by the current Prime Minister Fumio Kishida, whose popularity rating has melted since this summer.

60% of Japanese are against

Mr. Kishida to hold a state funeral has outraged the opposition who believe it should have been debated and approved in parliament. Several opposition parties will boycott the ceremony.

Tributes of this type for politicians have been extremely rare in Japan since the post-war period, the only precedent dating back to 1967.

The estimated cost of the ceremony – the equivalent of 12 million dollars euros – also irritated. After Abe's close protection failures, the government did not skimp on security: 20,000 police were to be deployed according to local media.

Peaceful demonstrations against the event have sometimes brought together several thousand people in recent weeks and a new rally was planned for Tuesday in front of Parliament.

A man also tried to set himself on fire near the offices of the Prime Minister last week to protest against the national funeral, according to local media.

According to the latest polls, about 60% of Japanese are opposed to this national funeral.

Some 4,300 people, including 700 foreign dignitaries, are expected to attend the hour-and-a-half-long, non-denominational ceremony.

Nineteen cannons will be fired as the cremation urn containing Abe's ashes will arrive at the Budokan.

After the national anthem and a minute's silence, several eulogies are to be delivered, including by Mr. Kishida and Yoshihide Suga, Abe's former right-hand man who succeeded him as Prime Minister (2020-2021).

The Emperor of Japan Naruhito and his wife Masako will not be present, due to their status politically neutral national symbols, but other members of the imperial household will attend.

Among the foreign guests are US Vice President Kamala Harris, Indian Prime Minister Narendra Modi and his Australian counterpart Anthony Albanese . France will be represented by its former president Nicolas Sarkozy.

China, with which Japan has fresh relations, sent a representative, but no member of its executive.