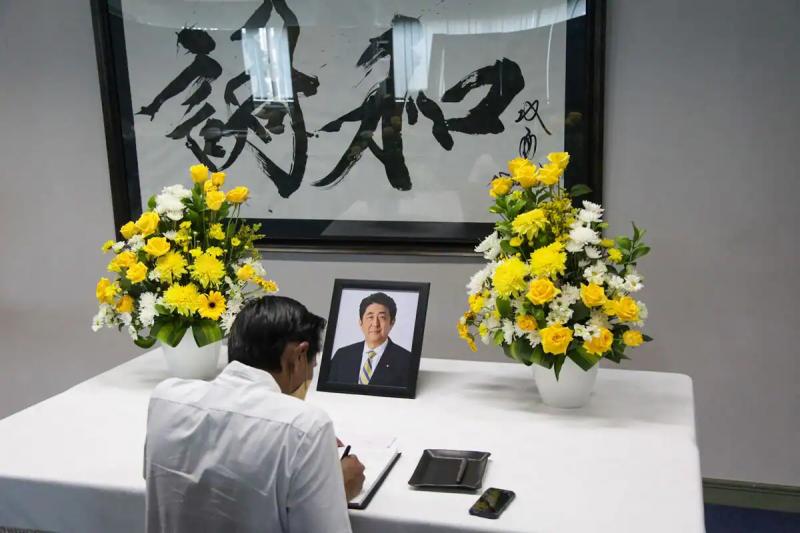 TOKYO | The relatives of former Japanese Prime Minister Shinzo Abe paid tribute to him on Monday during his wake in Tokyo, three days after his assassination during an election meeting at the age of 67.

A hearse carrying his body arrived Monday afternoon at the Zojoji Buddhist temple in Tokyo, where a funeral wake was held in the presence of figures from the Japanese political and economic world.

The funeral were to take place at the same venue on Tuesday attended only by those close to Mr Abe, before a public tribute at a later date.

Back from a tour of Southeast Asia, US Secretary of State Antony Blinken stopped by Tokyo on Monday to meet Prime Minister Fumio Kishida and personally offer his condolences and those of President Joe Biden.

“The American people share the Japanese people's sense of loss,” Mr. Blinken said, saying that “during his tenure, Prime Minister Abe has done more than anyone to elevate the relationship between the United States and Japan to new heights.

The head of US diplomacy handed Mr. Kishida letters from US President Joe Biden to Mr. Abe's family. In the evening, US Treasury Secretary Janet Yellen, also traveling to Asia, attended the wake.

His suspected killer, arrested at the scene of the attack, has been identified by police as 41-year-old Tetsuya Yamagami, believed to be a former member of the Japanese Navy's Maritime Self-Defense Force.

According to police sources cited by local media, he watched videos on YouTube showing how to make a homemade firearm like the one used in the attack.

He said he deliberately targeted Mr. Abe, saying he was angry at an organization he thought the politician was affiliated with. Japanese media had claimed that it was a religious organization to which Ms. Yamagami's mother had made large donations, putting their family in great financial difficulty.

The Unification Church, a South Korean-based organization also known as the 'Moon Sect', confirmed during a Tokyo press conference on Monday that the suspect's mother is among its followers. .

The Japanese branch of this sect did not give details of the suspect's mother's donations, saying it wanted to “cooperate” with the ongoing police investigation, and said it was horrified by the assassination of Mr. Abe, claiming that he had “never” been one of its members or advisers.

The Japanese, still in shock, voted on Sunday to renew half of the Upper House of Parliament, an election without real suspense and largely overshadowed by the attack of Mr. Abe which saw the plebiscite of the Liberal Democratic Party (PLD, nationalist right) of Mr. Kishida.

The coalition formed by the PLD and its ally Komeito won a large electoral victory, winning 76 of the 125 seats at stake on Sunday against 69 before the election, and now controls 146 of the 248 seats in the Senate, according to final results. /p>

With two other parties with which alliances are possible on certain points, the PLD and the Komeito even have a “super-majority” of two-thirds of the Senate that would potentially allow them to pave the way for a revision of the pacifist Constitution of Japan, of which Shinzo Abe, former leader of the PLD dreamed.

Mr. Kishida said on Monday that the election victory was a chance to “protect Japan” and to continue Mr. Abe's action.

Local media reported on Monday that the former leader could receive posthumously awarded the Grand Collar of the Supreme Order of the Chrysanthemum, the most prestigious decoration in the Archipelago.

The Prime Minister also said he wanted to get down to “deepen the parliamentary debate on the Constitution in order to be able to draw up a concrete amendment proposal” with a view to a referendum, while the different parties differ on the content of a possible constitutional revision.

Mr. Kishida also pledged to continue his work on important issues for Japan such as the COVID-19 pandemic, the Russian invasion of Ukraine and inflation.

The main force of opposition, the center-left Constitutional Democratic Party (PDC), secured only 17 seats (six less than before the election).

Thirty-five women were also elected Sunday, a record for elections to the Japanese Upper House. Turnout was 52%, down from 49% in the previous senatorial elections in 2019.

The election campaign was notably dominated by price increases due to soaring oil and gas costs. other raw materials, and risks concerning Japan's electricity supply, while the heat wave that has affected the country since the end of June raises fears of network disruptions.