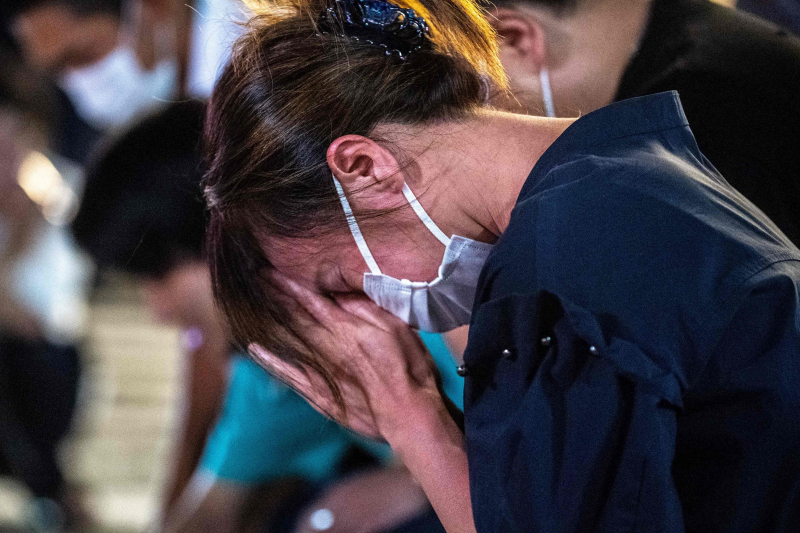 KASHIHARA | Japan was in shock on Saturday, the day after the assassination of its former Prime Minister Shinzo Abe, whose body was transported to Tokyo from the west of the country where he was the victim of a gunshot attack.

The assassination of one of the best-known politicians of the archipelago, which he governed for more than eight years, has deeply bruised and moved both Japan and the foreigner.

The alleged perpetrator of the attack, arrested at the scene, confessed to having deliberately targeted Mr. Abe, explaining to the police that he was angry at an organization to which he believed that he was affiliated. Some Japanese media mentioned a religious group.

The 41-year-old man, a former member of the Maritime Self-Defense Force (the Japanese navy) according to local media, has according to the police used a weapon “of homemade appearance”, on which further analysis was in progress .

At the time of the attack, Mr Abe was campaigning in Nara (west) for Sunday's senatorial polls, and Prime Minister Fumio Kishida announced on Friday that preparations for the elections, “foundation democracy”, would continue as normal.

Mr. Kishida, a member like Shinzo Abe of the Liberal Democratic Party (PLD, nationalist right), participated Saturday morning in a campaign meeting in Yamanashi (west of Tokyo) in front of 600 people, declaring according to the daily Mainichi that “violence does not know how to prevail over words”.

“We are not going to let what happened yesterday happen again,” said a member of security quoted by the daily, who described a reinforced security system, with the installation of metal detectors and searches of spectator bags.

Shinzo Abe's widow, Akie, boarded a hearse at 6 a.m. local time (2100 GMT Friday) on Saturday, which media said was carrying the former prime minister's body, and left hospital from Kashihara, near Nara, where he was taken care of after the attack.

Hit by two bullets in the neck, he was declared dead a few hours later, despite the efforts of a team of twenty doctors.

According to local media, a wake is scheduled for Monday evening and the funeral will take place on Tuesday, with only the family and loved ones of Mr. Abe in attendance.

The death of Shinzo Abe shocked Japan, where Mr. Kishida, whose mentor he was, denounced a “barbaric” and “unforgivable act”.

The assassination was condemned around the world, with US President Joe Biden saying he was “stunned, shocked and deeply saddened” and French leader Emmanuel Macron paying tribute to “a great Prime Minister, who dedicated his life to his country and worked balance the world.”

China and South Korea, with whom Japan has often rocky relations, also expressed their condolences, condemning the attack and paying tribute to the former Japanese leader.

Many people had been gathering since Friday at the scene of the attack. “I couldn't sit idly by,” 54-year-old Sachie Nagafuji, who came with her son to lay flowers, told AFP, adding: “I really respected him and trusted him as a man. political.”

Both nationalist and pragmatic, he made an impression with his audacious economic policy dubbed “Abenomics”, combining massive fiscal stimulus with an ultra-accommodative monetary policy.

Mr. Abe also advocated a Japan uninhibited from its militaristic past, and dreamed of revising the pacifist Japanese Constitution of 1947, written by the American occupiers and never amended since.

He had been forced to resign for health reasons , but had remained very influential within the PLD which he had led.

Local PLD officials said they had received no threat before the attack, the images of which were looped on television channels.

We see the former head of government standing on a podium, when a loud bang rang out, followed by a release of smoke. The spectators, surprised, bend down, and we see several people tackling another on the ground.

“The first shot sounded like a toy”, testified a young woman on the public channel NHK. Shinzo Abe “did not fall and there was a big bang. The second shot was more visible, you could see a spark and smoke,” she added. After the second shot, people surrounded the victim who had fallen to the ground “and gave him a heart massage”.

Security was present, but it was easy for spectators to approach M Abe.

Japan has one of the strictest gun control laws in the world and the number of people killed by gunfire is extremely low.