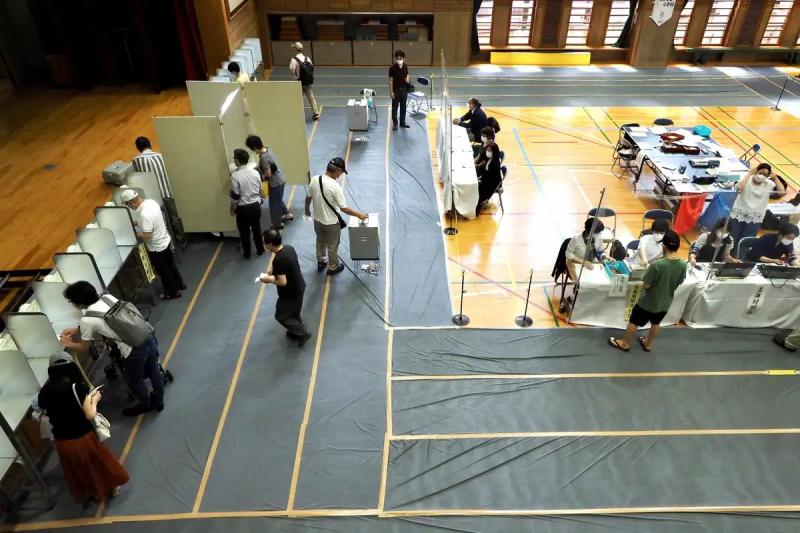 Japanese voters began voting on Sunday to renew half of the Upper House of Parliament, a poll largely overshadowed by the assassination two days earlier of former Prime Minister Shinzo Abe in a electoral rally in Nara (west of the country).

The current Japanese Prime Minister Fumio Kishida, whose Liberal Democratic Party (PLD, nationalist right) was given a large favorite in the polls, denounced the “barbaric” attack on his former mentor, insisting on the importance of “defending free and fair elections, which are the foundation of democracy”.

“We will never give in to violence,” he added.

The shooting of Mr. Abe, one of the Archipelago's best-known politicians, has deeply bruised and moved in Japan and abroad, and messages of condolence have poured in from around the world, including from China and South Korea, with which Japan has an often rocky relationship.

The alleged perpetrator of the attack, arrested at the scene, confessed to having deliberately targeted Mr. Abe, explaining to the police that he was angry at an organization to which he believed that he was affiliated. Some Japanese media have referred to a religious group.

This 41-year-old man named Tetsuya Yamagami is believed to be a former member of the Maritime Self-Defense Force (the Japanese Navy), and told law enforcement having used a homemade weapon.

After being briefly suspended by the various parties at the news of the former prime minister's attack, the election campaign resumed on Saturday with heightened security measures, as the police in Nara acknowledged “undeniable” flaws in those surrounding Mr. Abe's meeting.

It was dominated by local concerns, notably price increases and risks concerning the supply of electricity, while the heat wave which has affected Japan for end of June raises fears of a power shortage.

The ruling coalition, formed by the Liberal Democratic Party (PLD) of Mr. Kishida, 64, and his ally Komeito, could according to projections win more than 70 seats out of the 125 to be filled on Sunday (the Senate has a total of 248 seats, renewed by half every three years).

Unable to present an attractive alternative, the center-left Constitutional Democratic Party (PDC) risks, according to the polls, losing part of the 45 seats it currently holds, and its place as the main opposition force.

In a country often criticized for the lack of female representation in its institutions and the management of its companies, a record proportion of 33% of women are among the 545 candidates this Sunday.

A large victory in the senatorial elections would consolidate the power of Fumio Kishida, who championed a more redistributive economic policy dubbed “new capitalism”, ahead of a three-year period without scheduled elections.

His close cooperation with Western allies of Japan to put pressure on Russia has also been welcomed in the Archipelago, and its plan to increase the defense budget “significantly” is also popular, while China continues to assert its territorial ambitions in Asia- Pacific.

The upward trend in defense spending could strengthen further after the election, according to Yu Uchiyama, a professor of political science at the University of Tokyo, who thinks the “ position firmness (of Japan) towards China will probably be maintained”.