By Mathis Ferrut Journalist people, TV, reality TV Fascinated by the world of media from an early age, television has no secrets for him. Loft Story, Star Academy, Secret Story, the Ch'tis, the Marseillais… He is a real encyclopedia of reality TV. He is also a fan of sports (particularly football and Paris Saint-Germain) and music. He listens to everything and his playlists surprise more than one! In the TPMP best-of broadcast this Tuesday, July 12, 2022, C8 rebroadcast the sequence in which Cyril Hanouna and his columnists debated the salaries of reality TV candidates. This obviously did not please Jazz Correia who hastened to clash the host in his Instagram story…

The revelations made in the show did not please everyone and several candidates reacted . Among them, we find Jazz Correia. The young mother who decided to leave Dubai quickly ranted on the networks. “I just want to say that the salaries announced by TPMP are 100% false and the rankings let's not even talk about it” she said.

But, no offense to disgruntled candidates, C8 rebroadcast the sequence this Tuesday, July 12, 2022 in the best-of TPMP. Jazz did not fail to react again and clashed Cyril Hanouna in Instagram story. “Cyril Hanouna, what are you looking for? That we all get robbed, kidnapped or extorted just for the lies you display for the audience?” she got annoyed. 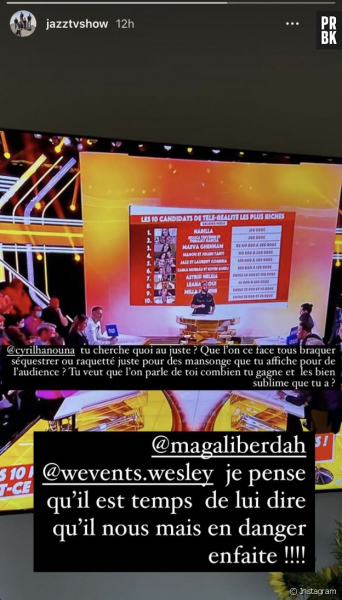 The mother of Chelsea, Cayden and London then directly attacked the host on his own money: “Do you want to talk about how much you earn and the sublime possessions you have?“, before asking Wesley Nakache and Magali Berdah, the two star agents of the reality TV candidates, to do something: “I think it's time to tell him that he actually puts us in danger!“.

Not sure Baba likes it, who will be back with TPMP at back to school and for many years to come…