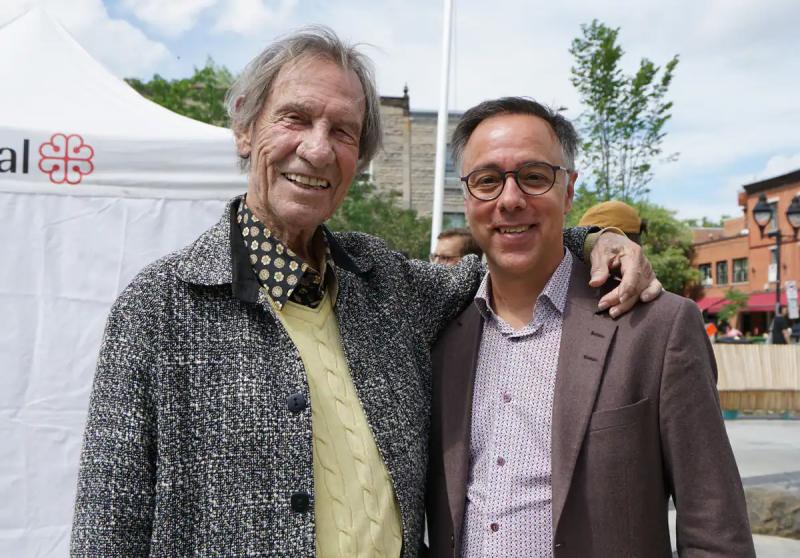 Jean-Pierre Ferland was present on Thursday afternoon for the official inauguration of Place des Fleurs-de-Macadam, a nod to his song of the same title, located on Avenue du Mont-Royal, between Boyer and Mentana streets.

In great shape, even if he seemed a little tired after having recently stayed in the hospital following a fall, the artist said he was above all honored and moved to discover this new place, at the very place where was the gas station that his father operated for almost 30 years.

“When I arrived here, my heart started to struggle, told the legend of Quebec music. The image of my father immediately came back to me. I remember being with him and all my brothers who worked here. We never thought it would end like this. I find it very touching to have transformed this place into such a beautiful place.”

At the beginning of the last century, Armand Ferland owned a gas station which was in operation for more than 80 years at this location. With his wife and seven children, he lived nearby, at 5089, rue Chambord.

“All the children worked here,” added the singer. I stayed there for at least a dozen years. As soon as we knew how to walk, we came to work for our father, he demanded that we be there.

The neighborhood has changed a lot since he left. Jean-Pierre Ferland admits that he no longer really has any benchmarks today. “I feel something that is distant from me, I would not be able to explain it. I loved my father very much and I also loved this corner very much.”

“Les fleurs de macadam” is one of the first songs he wrote in his life. It was in 1962. “My mother was very sensitive to my work and my writing, he confided. My father liked it too, but in a much more discreet way.”

When asked how his health is, Jean-Pierre Ferland smiles. “It's going very well, despite my very advanced age”, admitting in passing that he would have done well without the stupid accident that happened to him on June 24, the day of his 88th birthday. He fell in his bathroom and cracked two ribs. In mid-August, he had to be briefly hospitalized to drain blood that had accumulated around his lungs during his fall.

“I am very happy to be here today” , he concluded.

The layout of Place des Fleurs-de-Macadam was designed as a flood-prone place, that is to say that a mechanism makes it possible to recover rainwater which will then be drained naturally into the ground.

“On the Plateau, we are oriented towards ecological transition, explained Luc Rabouin, mayor of the borough. In addition to making a magnificent place, we wanted to integrate new ways of managing rainwater. Instead of sending them to our system, we tried to see how we could manage them on site. It's the first flood-prone square of this type in Montreal, but it's a pilot project that will become an example and which could be replicated in other neighborhoods.”

In the center of the square, a kind of small basin with rocks, which hide jets of water that start when the temperature is high, helps retain water. The square is surrounded by plants and wooden furniture winds around the edges, while a suspended work of art completes the layout.