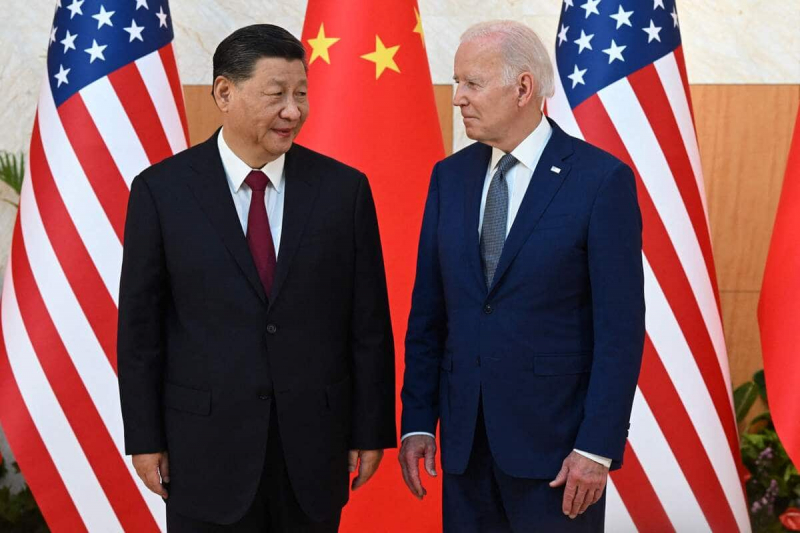 Joe Biden and Xi Jinping met Monday for a much-awaited face-to-face meeting, thanks to which the American president told his Chinese counterpart that he hoped to be able to avoid a “conflict” between Beijing and Washington.

After a handshake between the two leaders, Joe Biden said he wanted to “manage the differences and prevent competition from turning into conflict”.

Xi Jinping said in return he was ready for a “sincere” dialogue on strategic issues because the two countries must “find the right direction”.

The leaders of the two rival powers are to have a long meeting for the first time since Joe Biden was president, on the Indonesian island of Bali, on the eve of the G20 summit which brings together the world's largest economies.

< p>The absence of Vladimir Putin from this international meeting, nine months after the launch of the war in Ukraine, focuses even more attention on the Chinese president, at the height of his power after obtaining a historic third term. It is his second trip abroad since the start of the pandemic, following a visit to Central Asia in September.

Over the past three years, the rivalry between the two largest economies intensified as China grew in power and assertiveness, challenging American leadership and the geopolitical landscape since the end of World War II.

Monday's meeting on the sidelines of the G20 smacks of the Cold War and the White House spoke of the need to establish the “red lines” of the two countries to have “safeguards” and avoid tipping into conflict, according to a White House official.

The two leaders have spoken by phone or video five times since Joe Biden entered the White House, but never face-to-face, and they have known each other since 2017.

China said on Monday it hopes the talks will put bilateral ties “back on track”.

“We hope that the United States will join China in properly managing our differences, promoting mutually beneficial cooperation,” said Mao Ning, a spokeswoman for the Chinese Ministry of Foreign Affairs.

< p>In addition to China's refusal to condemn the Russian invasion, Washington and Beijing are at loggerheads over issues ranging from trade to human rights in China's Xinjiang region to the status of Taiwan.

Joe Biden notably wants to push Beijing to use its influence to moderate North Korea, which has just launched a record series of missile launches, seeming to be preparing to conduct the 7th nuclear test in its history.

But Xi Jinping will probably not be willing to show understanding and this meeting should set the tone for the G20 summit on Tuesday and Wednesday. If Ukraine is not on the official agenda, the war started by Russia and its consequences on the food and energy markets will be in the background of all the talks.

The Russian president, who is represented by his head of diplomacy Sergei Lavrov, will be conspicuously absent from the meeting, which is being held as the Russian army is retreating in southern Ukraine.

Ukrainian President Volodymyr Zelensky will be able to plead his case directly, speaking by videoconference.

At a minimum, Joe Biden and his allies want to get a clear message from the summit to Vladimir Putin that a nuclear conflict is unacceptable. Any common text is likely to be blocked by Russian opposition as well as Beijing's refusal to deviate from the Russian position or to appear to concede ground to Washington.

Summit host, the Indonesia has already warned that one should not necessarily expect the traditional final joint communiqué that concludes such meetings.

During a meeting with the President of the European Commission Ursula von ds Leyen, the Indonesian president called for the “flexibility” of the Europeans and the G7 to obtain an agreement. “I want a concrete result from the G20, which the world is waiting for” and “your support would, once again, be greatly appreciated,” Joko Widodo said in a statement.

Russia should be under pressure to extend an agreement allowing the export of grain and fertilizers through Black Sea ports, long blocked by the war in Ukraine, which expires on November 19.