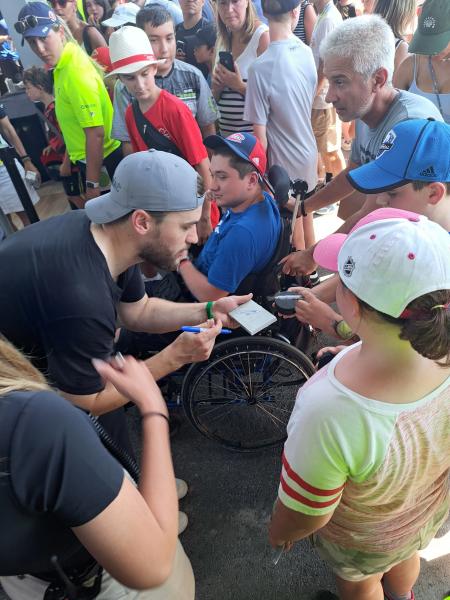 Jonathan Drouin is a happy man. The recovery of his wrist is going very well and he is counting the days until the start of his next season with the Canadiens.

In fact, he took part in a ball hockey game as part of the National Bank Open yesterday.

“J I started skating again and I started playing hockey, mentioned Jonathan Drouin. It feels good to be back on the ice and leave physiotherapy behind.

“I knew what to expect because I had suffered the same injury on my other wrist.”

Drouin is looking forward to reconnecting with his Canadiens teammates on a regular basis. He is excited to work under Martin St-Louis.

“I can’t wait to practice and play games. I can't wait to embark on all of this with him. I believe we are headed in the right direction. We had an excellent repechage.”

At the end of the ball hockey game, he was very generous with the fans. He took several photos and signed several autographs.

“I come every summer. I go to games more often when it's the men, but I also come when the women are in action, clarified the forward.

“In recent years, my favorite players were Novak Djokovic and Roger Federer. This year, I will line up behind Félix Auger-Aliassime.

“I find him calm even when things are not going well. You can't see any difference in his behavior. When you see him move on the court, you see that he is an exceptional athlete.”