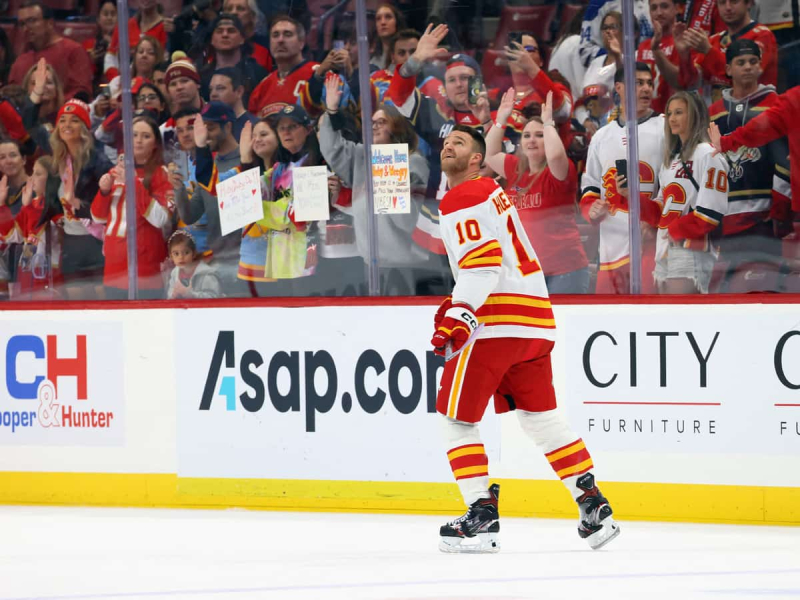 Jonathan Huberdeau has been quiet on his return to Florida, his first since being traded to the Calgary Flames by the Panthers. The Quebecer was still able to give back to his former team, as the visitors won 5-4 in the shootout on Saturday.

The Panthers' all-time leading scorer obviously had a heavy heart as he waved to fans at FLA Live Arena. The organization paid tribute on video to the Saint-Jérôme hockey player and MacKenzie Weegar, who were part of the same transaction on July 22.

This summer drama, where two scorers of more than 100 points in 2021-2022 changed address, also allowed Matthew Tkachuk to move. If the latter distinguished himself with a goal and an assist, it was Huberdeau and the Flames who had the last word in the shootout.

The 29-year-old forward was the one of the two players of his own to hit the target in a shootout, the other being Rasmus Andersson. Huberdeau, who did not pick up a point in this game, performed in front of a mixed crowd.

Jacob Markstrom stood up in front of the Panthers at the right time, he who finished with 31 saves , like his counterpart Spencer Knight.

Adam Ruzicka had a very good game for the Flames by amassing three points, including two goals. Left aside by head coach Darryl Sutter for the entire month of October, the Slovak now has eight points in as many games in November.

Colin White, Sam Reinhart and Eetu Luostarinen ensured the response for the Panthers, who suffered a second consecutive loss.