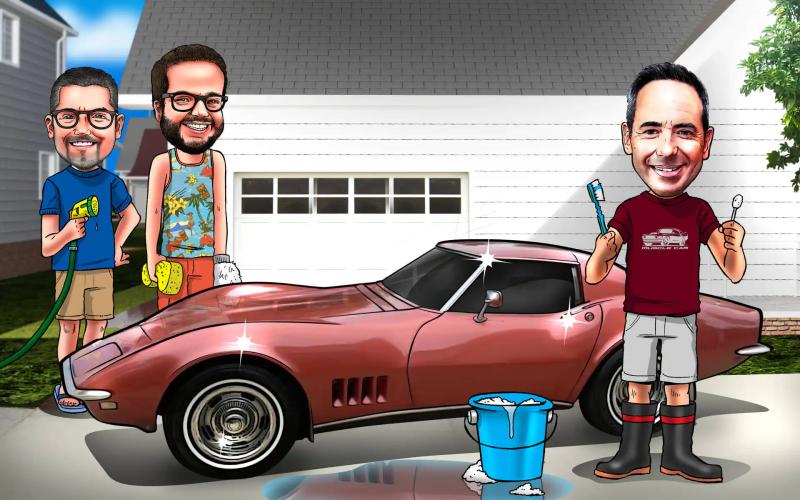 Without being the greatest car connoisseur, José Gaudet is a genuine enthusiast. He doesn't know all the models or all the details for each year of production, but that doesn't stop him from loving cars deeply.

To discuss this passion that drives him anime, the comedian was on the show Le Guide de l'auto on QUB Radio, hosted by Antoine Joubert and Germain Goyer.

Humble beginnings with a Pontiac Firefly

Like many children, José Gaudet discovered the automobile through small Matchbox cars. “My favorite game is to park my cars in a small garage to watch them. Today, forty years later, that’s exactly what I do, but with big cars,” he says.

At the age of 16, his interest in the automobile materialized even more concretely. “Following my parents' divorce, I inherited a three-cylinder Pontiac Firefly a few months after getting my driver's license,” recalls José Gaudet. From that moment, he enjoyed the feeling of being behind the wheel of a car.

A misadventure in a BMW Z3

In 2001, when his career in comedy and radio was experiencing strong growth, José Gaudet wanted to buy a first car that would make him vibrate. On the other hand, he admits that he had difficulty affording the object of his dreams: a Porsche Boxster. Not knowing what the future held for him, he preferred to be a little wiser and get a used BMW Z3. “She was silver gray. It was a very nice little roadster. Everyone wanted one when it came out! ,” says José Gaudet.

However, this dream quickly turned into a nightmare since it was, in fact, a 'a car that had been previously in an accident and whose mileage displayed was not accurate.

“It was this misadventure that gave me the courage to go back to Porsche and buy the blue 2000 Boxster that I finally wanted,” he adds.

A passion for the old ones

Having owned a succession of Porsches, Maseratis and even a Ferrari California, José Gaudet was far from the world of vintage cars. If he bathes today in this world of enthusiasts, it is thanks to his professional development. “Before hosting Les Légendes de la route, I never thought I would love old cars so much,” he says.

Thanks to this program broadcast on Historia, José Gaudet was able to admire and drive a variety of cars from different eras, which led him to buy one later. “My 1969 Camaro, it's spectacular. I flip over it. It's the best tank I've ever had,” he says.

Obviously, José Gaudet really had a thing for the beauties of yesteryear since he added a 1968 Chevrolet Corvette to his collection this year.

During this show, we also talked about the 2023 Mitsubishi Outlander PHEV and the Myers Manx 2.0.

< p>The two animators give their impressions of the  Genesis GV60 2023 recently tested.