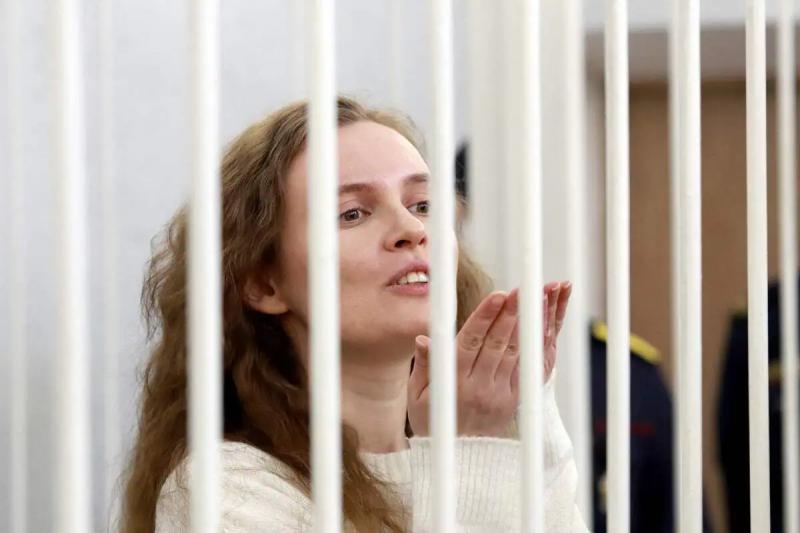 His trial took place behind closed doors in the town of Gomel (south). No information has filtered on the content of the charges of treason. The journalist's lawyer had to sign a confidentiality agreement even preventing him from informing his client's relatives.

The Belta agency also does not provide any details on the facts alleged against the journalist.

The article of the criminal code on the basis of which she was judged punishes the transmission of State secrets to foreign actors, espionage or even collaboration with foreign entities in view to undermine the security of Belarus.

This 28-year-old woman used the pen name Katerina Andreeva in her work.

She was arrested in mid-November 2020, in the midst of a historic protest movement in Belarus against the re-election, deemed fraudulent, of President Alexander Lukashenko.

Police arrested her in Minsk while she was filming a rally in tribute to an artist, Roman Bondarenko, who had died three days earlier when he was arrested by the law enforcement agencies.

She had been accused of organizing riots, then sentenced in February 2021 to two years in prison with one of her journalist colleagues, Daria Tchoultsova.

The two women worked for Belsat, based in Poland neighbor. In July 2021, this opposition media was declared “extremist” by the Belarusian justice.

“It makes me furious to see how the regime is taking revenge against those who dared to resist,” reacted on Twitter the figure of the Belarusian opposition in exile, Svetlana Tikhanovskaïa. She felt that Katerina Bakhvalova had been punished for having “shown the world the truth about the brutality” of the authorities.

Denouncing a “bogus” and “political” trial, the director of the NGO Amnesty International for Europe and Central Asia, Marie Struthers, denounced a “terrible and unjust new verdict” against a “courageous” journalist.

“Katerina Andreeva and other critics of the Belarusian authorities who are imprisoned simply for having peacefully exercised their right to freedom of expression must be immediately released,” she added.

The regime of Alexander Lukashenko, in power since 1994 and supported by the Kremlin, relentlessly repressed the 2020 protest movement by sentencing dozens of opponents and journalists to heavy prison terms.

According to the NGO Viasna, itself targeted by the repression, 1,244 people are currently imprisoned in Belarus for political reasons.