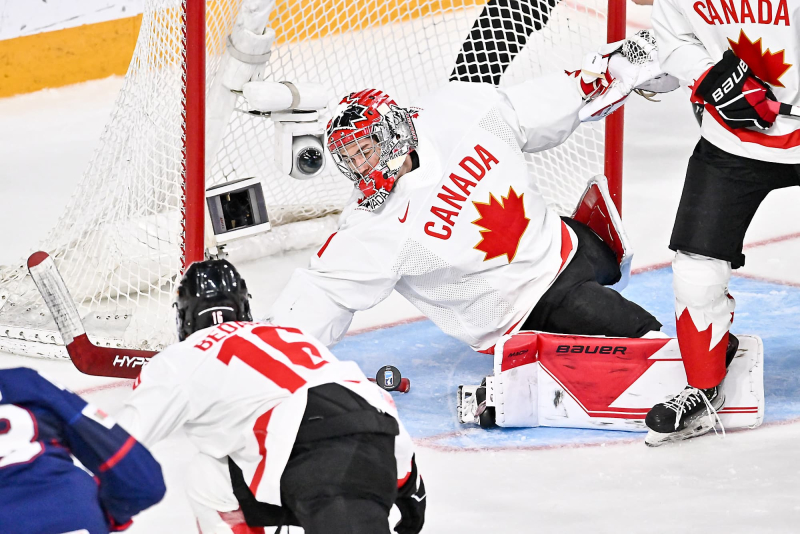 HALIFAX | Team Canada Junior was hoping not to have to rely on the magic of Connor Bedard again in the semi-finals against the United States, this Wednesday evening. Joshua Roy and Thomas Milic got the message.

Joshua Roy gave the Americans a hard blow by making it 4-2 in the second period.

Roy had two goals and two assists while Milic was sensational, making 43 saves to help ECJ win 6-2 and thus succeed in his first mission, which is to offer himself a chance to win the gold medal.

Canada will face the Czech Republic on Thursday night in the grand final. In the only clash between the two teams, the curtain raiser of the tournament, the Czechs won 5-2. On Wednesday, they beat Sweden in overtime to reach their first final since 2001.

But the opening minutes of Wednesday's game gave no indication that ECJ would get their bye to the final.

The United States weren't intimidated by the boisterous crowd at Scotiabank Center in the first period and they completely dominated the Canadian team for the first ten minutes of play. Logan Cooley first put down the Canadian fans in the second minute of play when he collected a rebound before beating Thomas Milic between the pads, then Kenny Connors doubled the American lead halfway through the period.

But as has literally been the case since the start of the tournament, Connor Bedard pulled another rabbit out of his hat less than two minutes after that goal to give his team some breathing room despite the tough start to the game, particularly defensively. The 17-year-old striker charged into the net before redirecting a fine pass from Ethan Del Mastro, to score his ninth goal of the tournament and revive a crowd that had been lulled by the intensity of the Americans.

The tide completely changed as soon as play resumed, in the second.

Logan Stankoven first tied the game in the 47th second by jumping on a throwback from Brandt Clarke, then Adam Fantilli sowed hysteria in the amphitheater by taking advantage of a superb pass from Zach Dean to give Canada the lead.

After watching the Americans score, before the goal was finally disallowed for goalkeeper interference, Roy added some more before the end of the engagement with a nice precise backhand shot, in the upper part, to register his third point in the match.

A few minutes earlier, the Beauceron striker had also spent precious seconds on the penalty kill, managing to keep the puck in United States territory, much to the delight of the crowd who had not failed to let him know when he returned to the bench.

With an assist on Roy's goal, Bedard took his World Juniors career tally to 36, joining Esa Tikkanen for fourth all-time. Only Peter Forsberg (42), Robert Reichel (40) and Pavel Bure (39) are ahead of him now.

The American team had thought to reduce the gap at the start of the third, but, for a second time, the video replay showed that the United States striker, in this case Rutger McGroarty, had obstructed the goalkeeper.

Exactly as they had done the first time , ÉJC scored soon after, thanks to Brandt Clarke who had taken advantage of good work by Owen Beck and Fantilli on the forecheck.

Roy completed the scoring in an empty net, while ECJ was playing shorthanded. His four points allowed him to reach the milestone of 10 in the tournament and he tied the mark of most points for a Quebecer 18) established by Jonathan Huberdeau.

The United States will therefore meet you with Sweden, for the bronze match.