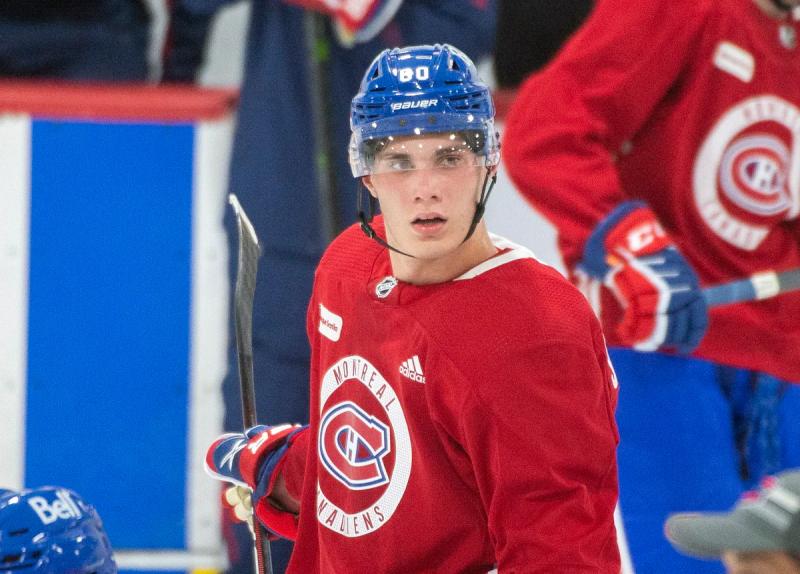 BUFFALO | When he went on stage at the Bell Center to receive his jersey from the hands of the Canadian staff, Juraj Slafkovsky was already out of place with his build. We hadn't seen anything.

The very first choice of the last draft came in the rookie tournament, in which the Canadian takes part in Buffalo, heavier by nine pounds. He now swings the scale at 238 pounds.

To give an idea of ​​magnitude, last year, according to official NHL statistics, only seven players on the league, including two goaltenders , showed a stronger frame.

“I lifted weights in the gym, so I expected that. I'm happy with the result, said the 6-foot-3 Slovak, assuring not to have fallen in love with the poutine. But I think I'll be a little lighter when the season starts.”

It remains to be seen how this weight gain will translate on the ice. In the past, it happened that the game of some skaters was affected by too much weight gain in a short time. However, in this case, it seems reasonable. Especially for the style he wants to adopt.

“On the ice, I worked on my one-on-one fights, my technique to protect the puck. I also paid attention to my skating and different other stuff needed for my game,” listed number 20.

< p>Over the summer, Slafkovsky briefly returned to his native Slovakia before returning to Montreal to hit the ice with some veterans and hopefuls of the Canadiens.

“It's an ox. He is huge. I'm 5 feet, 6 inches and I weigh 180 pounds, wet, so…, launched, bluntly, Xavier Simoneau, who took part in these summer training sessions. But he's so nice. He works hard. Fans are going to love him.”

According to Arber Xhekaj, who also smashed the scale until it came in at 238 pounds, opponents of the Slovak great will have to behave yourself.

“We competed against each other quite a bit all summer. He is very strong. Sometimes I would come into the corner intending to smash him and he wouldn't budge. However, we display about the same weight, ”said the defender.

“At the start, we took it easy. From time to time, it happened that one reversed the other. At a certain point, I said to myself: “It's not true that I'm going to let a younger one have the upper hand”, launched the 21-year-old full-back, with a burst of laughter.

Since Thursday evening, finally, the two colossi can have fun against rivals who will not become teammates in the near future. Although it's just rookie camp, Slafkovsky wants to use it to make a good impression.

“I want to dominate this tournament and help the team win games. It's only a first step, but each of these meetings is an opportunity to show what I can do,” he said.

After facing the Sabers on Thursday, Slafkovsky could face the Devils tonight or the Senators on Sunday afternoon. If he were to be in uniform against the Devils, he would possibly face Simon Nemec, his compatriot selected just behind him in the draft.

“It will be fun. Filip (Mesar) and I talked about it. We said to ourselves that we had to try to freeze it in a corner of the ice rink. So, I hope I'm going to play.”

The message has been sent.