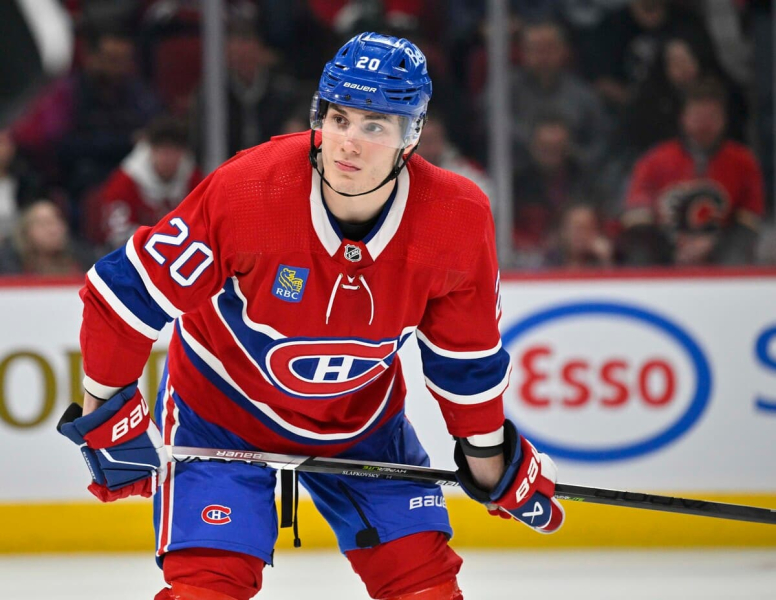 Life isn't easy for 18-year-olds starting their NHL careers. Often, the first season is strewn with pitfalls. Especially in the middle of the calendar. The very first choice of the last draft, Juraj Slafkovsky is no exception.

The great Slovak has been going through a slightly more difficult passage since the beginning of December. He hasn't put his name on the scoresheet in the last 11 games. As for his last goal, his fourth of the season, it dates back to December 1, in Calgary.

“Getting through a season like this is part of learning and maturing a player,” said Martin St-Louis after a rare training session held on Sunday. Looking at where Slaf was at the start of the season and where he will be at the end, we will see a progression. But it will never be a straight line.

Beyond the much higher caliber, we often tend to identify the heaviness of the schedule and the many trips to explain the difficult adaptation of young hockey players. Especially for those coming from Europe.

Slafkovsky, with the repartee that we know him now, made it clear that he was not of this opinion.

“Last year, I took an eight-hour bus ride to games. So flying for two hours I think is a nice improvement. It's easier. In addition, we are much more comfortable.

In fact, when asked what made him realize he was playing in the NHL the most, he offered the following answer: “When you park your car in front of the plane and climb the stairs to board the aircraft. »

Joking aside, he admits the reaction time is much shorter than he was used to. Therefore, all the details that make it possible to subtract the slightest fraction of a second are important. Skating with your head held high is one of those elements.

Especially since it helps to avoid hard-hitting checks like the one he has been the target on a few occasions since the start of the calendar. Moreover, a few weeks ago, St-Louis had indicated that this is an aspect on which he inevitably had to work.

“I have always been the biggest and the biggest. In addition, in Europe, the playing surface was larger. So I had more time to look up and look at my options, he explained. That's not the case here. »

No, Slafkovsky is not done learning. Faced with Rangers, he understood that soft passes, backhand, numerical superiority, were to be avoided. Especially when a fast skater like Chris Kreider is around.

“I don't think I'm going to be freaking out backhand burgers in the future. I will choose another option,” he laughed.

There was a time when such a blunder, even if it had been committed by a rookie, would have caused a crisis in the coach and caused the guilty of skipping several turns. This was not the case for the Slovak.

“I knew I had made a mistake. I didn't need to be shouted nonsense. That's the good thing about Martin. He showed me what I should have done instead of giving me shit,” he said.

Unlike Shane Wright, whom the Seattle Kraken returned to juniors (with the Kingston Frontenacs), those learning moments, it looks like Slafkovsky will continue to experience them in the NHL.

“No one told me about going to the American League or going back to Europe,” he said.

Nor did he have been told , apparently, proposed to participate in the World Junior Hockey Championship.

“I was not asked the question. Anyway, I want to play in the NHL. We had injured players at the time, so the opportunity was good for me to have more ice time. I was focused on what I had to do here.”

However, he followed the Slovak team and cursed Canada when Connor Bedard scored the goal of the victory in overtime.