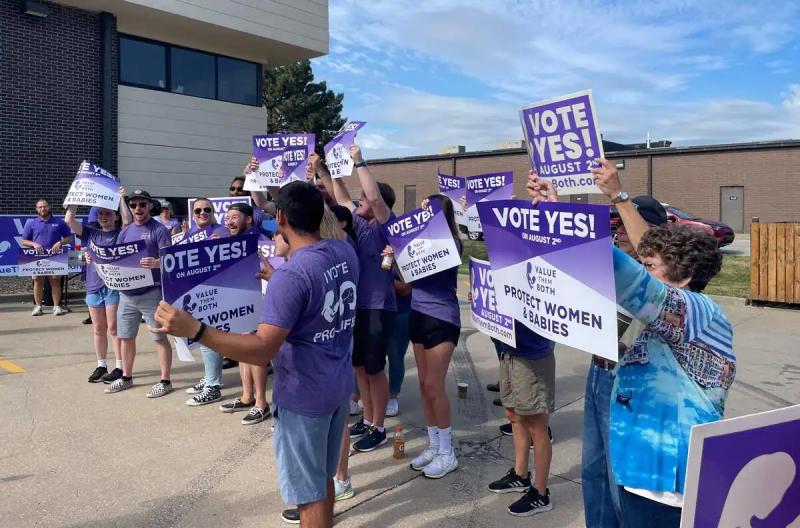 Through the tree-lined streets of affluent Kansas town Leawood, many election signs are planted in neatly trimmed lawns: this Midwestern state prepares to hold the first major abortion ballot since the U.S. Supreme Court struck down federal right to abortion.

Kansasians head to the polls on Tuesday to decide whether the Constitution of this traditionally conservative state should be amended to remove the abortion rights guarantee.

Those in favor of change – supporters of the “yes” – argue that it would allow lawmakers to regulate abortion without interference from the judiciary.

“It just restores our ability to have a conversation,” argues Mackenzie Haddix, spokesperson for the “Value Them Both” movement, which seeks to end constitutional protections stemming from a 2019 Kansas Supreme Court ruling. /p>

“The people of Kansas will then be able to unite (…) to reach a consensus,” she told AFP during a rally on Saturday morning.

Banning abortion is not the official goal of the “Value Them Both” campaign.

But on the other side, activists see the constitutional amendment as a thinly veiled attempt to pave the way for a clear cut ban by the Republican-dominated local legislature, which would follow in the footsteps of at least eight more US states since the US Supreme Court's June ruling.

“Rulings About Our Bodies”

Proponents of the “no” side watch anxiously as neighboring states of Missouri and Oklahoma have imposed near-total bans (Missouri does not allow exceptions for rape or incest).

In Kansas itself, a local conservative politician introduced a bill this year that would ban abortion without exception for rape, incest, or to protect the life of the mother.

Currently, abortion is legal in Kansas up to 22 weeks of pregnancy. Parental authorization is required for minors.

“Ultimately, the amendment takes away that right to personal autonomy enjoyed by all Kansas residents,” Ashley All, spokesperson for the Kansans for Kansans' “No” campaign, told AFP. Constitutional Freedom” (KCF).

“And that we are able to make decisions about our bodies, our families, our future without government interference is a right,” she added.

Voting, scheduled to coincide with Kansas primaries , will be the first opportunity for American voters to express their views on abortion since the Supreme Court overturned its landmark 1973 Roe v. Wade.

Other states, including California and Kentucky, are due to vote on the issue in November, coinciding with midterm congressional elections in which Republicans and Democrats hope to rally their supporters around abortion.

Anne Melia, a volunteer with the KCF Abortion Rights Campaign, went door-to-door in Leawood on Thursday night to advocate for her cause.

“I don't don't think the government should be telling women what to do,” the 59-year-old explained.

Christine Vasquez, 43, says she plans to vote 'yes' in hopes of seeing a vote on banning abortion in the future.

“I just want this to go to the vote of lawmakers and voters,” she told AFP. “I would vote for no abortion, I think life begins at conception.”

In the midst of a tense abortion debate, the country will have its eyes riveted on Kansas on Tuesday, as the results will mean either a boost or a snub for both sides.

But in Kansas, the political reality is more complicated.

The state leans heavily Republican and has not voted for a Democrat in the White House since 1964.

But Kansas' most populous county elected a Democrat, Sharice Davids, to the House of Representatives in 2018, and state Governor Laura Kelly is a Democrat.

As for views on abortion, a 2021 survey from Fort Hays State University found revealed that less than 20% of Kansas respondents agreed that abortion should be illegal even in the case of rape or incest.

Half said they believe government Kansas government should not impose any regulations on the circumstances in which women can have abortions.