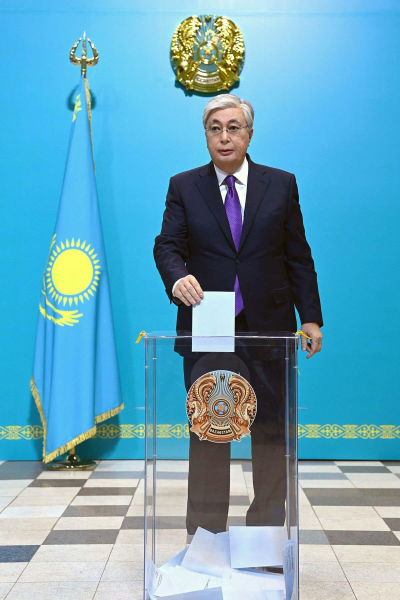 Kazakhstan's incumbent President Kassym-Jomart Tokayev has clearly won the presidential election, in the absence of opposition, confirming his status as the new strongman of the largest country in Central Asia, at the end of a dark year for this state rich in natural resources.

According to the preliminary results given Monday by the Electoral Commission, this 69-year-old man who came to power in 2019 obtained 81 .31% of the votes and the participation amounted to 69.44%.

As expected, his five opponents made up the numbers, none of them exceeding 3.42%.

Worse, the “against all” vote option, a novelty for this election, has won 5.8% of voters, coming in second place.

Located at the crossroads of major trade routes, Kazakhstan descended into chaos in January when protests over high prices escalated into riots, before being brutally suppressed. Toll: 238 dead.

The country remains traumatized by this crisis and, a sign that tensions persist, the authorities announced on Thursday that they had arrested seven supporters of an opponent in exile, accused of fomenting a “coup”.

On Sunday night, Mr. Tokayev, who had obtained nearly 71% of the vote in 2019, called for “unity” to carry out the program of his constitutional reform in June.

“This election opens a new era and all the main institutions of power will be reformed,” he promised.

He reiterated his commitment to economic reforms and to the “end of the monopoly in power”, as Kazakhstan experienced during the three decades of the reign of Nursultan Nazarbayev, who resigned in 2019.

President- candidate had campaigned with his project to create a fairer “New Kazakhstan”. But economic difficulties persist, as do authoritarian reflexes.

Mr. Tokayev, who honed his first weapons as a Soviet diplomat, became a key man in the Nazarbayev regime at independence.

But after being considered the henchman of his predecessor, the Kazakh president officially undertook to cut the cord in favor of the January crisis.

He transformed himself this year into a relentless leader, firing on rioters in January, arresting relatives of the Nazarbayev clan, then standing up to Russian President Vladimir Putin.

A clan struggle that did not prevent Mr. Nazarbayev from being the first to congratulate his ex-protégé on his re-election, “indisputable proof of the unshakeable faith of the people in (his) reforms”.

If the identity of the winner was sewn with white thread, a slight suspense hovered as to the percentage of votes that Mr. Tokayev would collect, a pure product of the Soviet era who wants to be the man of renewal.

But this “New Kazakhstan” that Mr. Tokayev calls for, in particular through the end of a superpresidential regime, is struggling to get rid of its authoritarian reflexes after three decades spent under the thumb of the omnipotent Nursultan Nazarbayev.< /p>

Like this election in line with the Nazarbayev era, which won 98% of the vote in 2015, the political landscape remains deserted and the opposition muzzled by pressure from the authorities.< /p>

And on Sunday, AFP saw several voters take photos of themselves outside polling stations, with many citing the “obligation” to show the photo to their employer on Monday.

< p>But despite the overwhelming score and lack of competition, Mr. Tokayev said the campaign had been “fair and open”.

The OSCE international election monitors, who regretted before the election that their recommendations “relating to fundamental freedoms and the conditions of eligibility and registration iption of the candidates” have “remained without action”, must hold a press conference at 9:00 GMT.