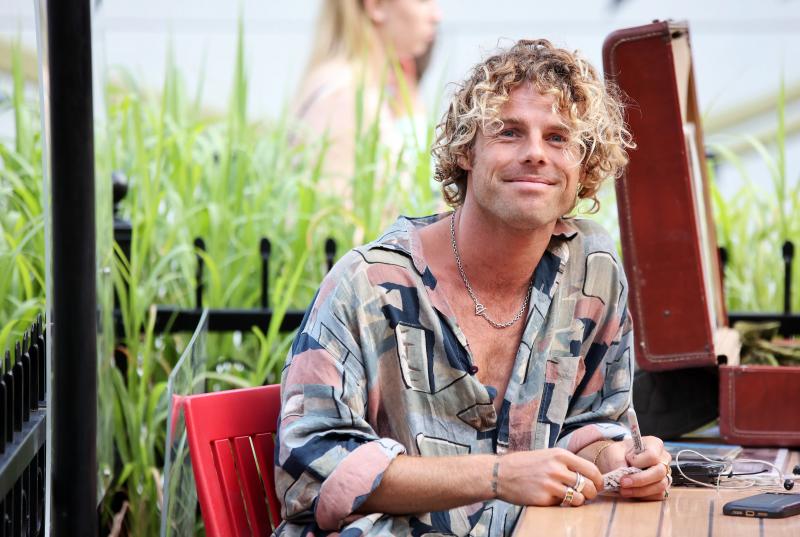 In the midst of a pandemic, Kim Churchill would get up at 4:50 a.m., no matter where he was, to compose new songs. He wrote 50 of them, and 13, his favourites, will be found on his next album which he will launch at the beginning of 2023.

“I got up, I I made a cup of tea in the dark, set up my microphones, lit candles and hit the “record” button on my tape recorder. I was composing from 5 a.m. to 8 a.m.,” he revealed in an interview.

The 31-year-old Australian one-man band explains that he was totally inspired at that hour of the morning, whether he was in his small recreational vehicle or at friends' house.

“It was as if the songs emanated from my dreams. We even recorded the album with sessions at 5 a.m. We opened the windows and the doors of the studio and we heard the birds start to sing and the life resumes”, he related.

The simple Fighter and Please Come Homehave already been released and this new album, entitled Dawn Sounds, will be available in January.

Kim Churchill will be alone on stage when he performs tomorrow as part of the first edition of the Cigale event at the Baie de Beauport, in Quebec. A concert that will take place on the beach and on the shores of the St. Lawrence River.

“I had to be in 2019, but the pandemic got in the way. I want to bring the public into a beach atmosphere. I have seen images of the site and it is very exciting. It's a good place for me,” he said.

Connecting with the crowd

Man-band, Kim Churchill will be alone on the planks. He has already been accompanied by two drummers and he did not like the experience too much.

“I like to improvise and go where I want. It took away part of who I am. It can be done with a group, but it requires a certain structure. I like to play with the energy of the crowd and connect with them. This is what is most important to me”, he explained.

Kim Churchill has been present in Quebec since his first album With Sword and Shields , launched in 2009.

“I have been performing in Quebec since the age of 19. I like. I feel good there and people made me feel welcome. I love summer, cities, food and culture, but what I love most are people. They love me and I love them back. It is difficult to understand and explain. Maybe it's just luck,” said the Newcastle, Australia resident.

“I would say more like I pay rent there. I don’t really feel like I live there”, he mentioned.

On the road for a four-month tour with shows in Canada and Europe, the musician feels alive after two years of COVID.

“It's like I've found a part of my soul. Being back in Canada is no stranger to this feeling. I've been coming here since I was 19 and it's something that's part of who I am. I missed it so much. I felt like one of the toys from the movie Toy Story that was stored on a shelf,” he said.

However, he managed to give shows all over the place during the times when everything was stopped.

“I would arrive with my camper and my little stage and I would perform in front of 40-45 spectators. It was something that I could do and that was allowed. It allowed me to hold on and keep going. It was very cool”, he said.

Kim Churchill also took the opportunity to launch a collection of four EPs titled I Am, Forgetting< /em>, The End and Again, recorded between 2019 and last year in Berlin, Vancouver Island, Blue Mountains in Australia and Devon in England.

►Kim Churchill will perform tonight at the Théâtre de Lac-Brome in Estrie and tomorrow at 8:30 p.m. at the Cigale à la baie stage of Beauport.