Thanks to episode 16 broadcast this Tuesday, June 14, we finally know the names of the 4 finalists who will compete during the pole test in Koh Lanta 2022 – Le Totem Maudit. But where the qualifications of Jean-Charles, Géraldine and Bastien are not questioned by viewers, that of François is today criticized. Why ? He is suspected of having resorted to cheating during the orientation test by recovering the beacon.

Since the scandal of the “La Légende” edition with certain candidates who managed to find food on the island, Koh Lanta fans are more on the lookout than ever to unearth and denounce the slightest cheat visible on the screen. And according to them, it is François – who has just qualified for the grand finale of the Le Totem Maudit edition., who allegedly cheated during the orientation test.

A final qualification for François

First of all, a bit of context . Following the qualifications of Jean-Charles and Géraldine, there was only one dagger left to find to hope to qualify directly for the post test. A frustrating and worrying situation for François, who notably felt the breath of Ambre and Bastien in his neck.

However, after long minutes of going around in circles, the adventurer has miraculously found one of the famous beacons at the origin of the ultimate clues intended to help him locate the dagger. A knife that he will finally find a few minutes later at the foot of a tree.

Did the finalist cheat with the beacon?

Where is the supposed cheat in there? This is a detail that has not escaped anyone, when François went to the beach to plant his knife in a log near the host of TF1, the candidate was not empty-handed. On the contrary, one could notably find there… the famous beacon. A detail far from trivial since, according to angry viewers, this therefore suggests that he would have recovered it after having found it, thus preventing Bastien and Ambre from finding the dagger before him. . 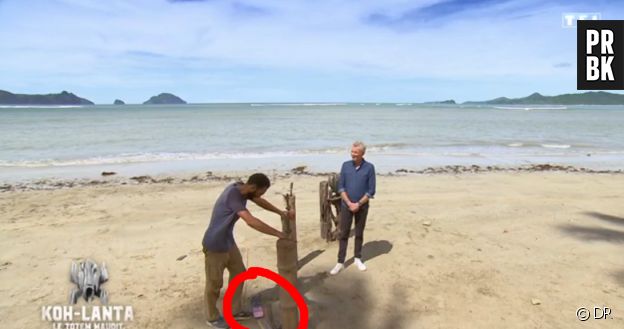 Koh Lanta 2022: Did François cheat during the orientation test? The big mystery of the

tagSo, info or intox? Did François really keep the beacon so as not to be overtaken? Denis Brogniart can breathe, there is no reason to think that he would have cheated on purpose. And for good reason, just go back a few minutes to realize that he had no beacon in his hands when he found the dagger. In fact, he was even filmed (re)hiding the beacon a few seconds after finding it.

In fact, if he finally appeared on the beach with the board, that can be explained in two ways. The first one ? He wanted to keep it as a souvenir AFTER he found the dagger. The second ? Once his victory was won, he may have indicated his hiding place to Ambre and Bastien in order to reassure them of their lack of observation.

Of course, these are only guesses, especially since François has not yet spoken about these rumors of potential cheating. On the other hand, one thing is already certain, the adventurer got everyone drunk when it was time to celebrate his qualification.

Even though Jean-Charles and Géraldine had heroically qualified long before him, the firefighter indeed released us a monologue so long and egocentric to pass for a boss that we now come to wonder how he will balance on the posts with such swollen ankles.

The broadcast date is known: go now on June 21, 2022 on TF1 to discover the grand final with the pole test of Koh Lanta – the Totem Maudit and find out the name of the big winner between Géraldine , Jean-Charles, François and Bastien. Note that the latter will be the victim of a final curse for the test of the posts.