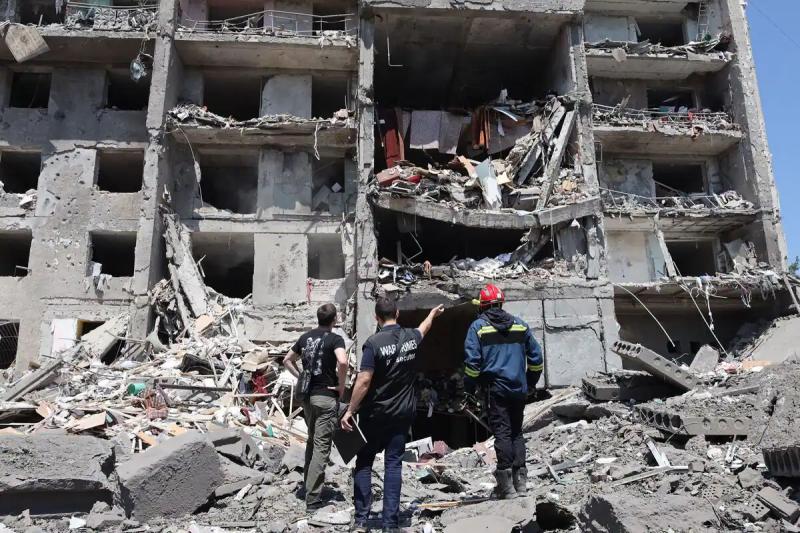 According to Ukrainian military and civilian authorities, at least 21 people, including a 12-year-old boy, were killed before dawn on Friday by three Russian missiles that destroyed “a large building” and “a tourist complex” in Serguiyvka, a town on the Black Sea coast, about 80 km from Odessa, in southern Ukraine.

“This is deliberate Russian terror and not a few mistakes or an accidental missile strike,” Ukrainian President Volodymyr Zelensky denounced late Friday evening, while local authorities assure that “there is no had not the slightest military target” at the location of the strikes.

In response to Ukrainian accusations, the Kremlin assured that “the armed forces of Russia do not operate on civilian targets” in Ukraine, reaction described as “inhumane and cynical” by Berlin.

According to Kyïv, the strikes on Serguiïvka left 38 injured, including five children, two of them in serious condition.

“I call on our partners to provide Ukraine with missile defense systems as soon as possible. Help us save lives,” Foreign Minister Dmytro Kouleba pleaded once again on Twitter, calling Russia a “terrorist state”.

According to the Ukrainian army, the weapons used against Serguiïvka are Soviet cruise missiles dating from the Cold War and designed to strike a carrier battle group, the same type as those which struck a shopping center in Kremenchuk (center of Ukraine) in broad daylight on Monday. Ukraine, 200 km from the front) and having caused at least 19 deaths, according to the latest still provisional relief report.

Mr. Zelensky acknowledged that the situation remained “extremely difficult” in Lyssytchansk, industrial Donbass, where most of the fighting is concentrated and where the Russians “are trying to surround” the Ukrainian army “from the south and from the west” , according to the local governor, Serguiï Gaïdaï.

In its daily morning update on the situation on the front, the Ukrainian General Staff affirmed on Saturday that “the Russians carried out an offensive [towards a locality a few kilometers west of the city], without success, and withdrawn”.

On Friday, the Russian Defense Ministry announced that its forces “had arrived at the gates of Lysychansk” and inflicted “heavy losses” on the Ukrainian army.

Lyssychansk is the last major city not yet in Russian hands in the Lugansk region, one of the two provinces of Donbass, a largely Russian-speaking region that Moscow intends to fully control.

About sixty kilometers further west, in Sloviansk, a city in Donbass not far from those of Izium and Lyman, already in the hands of Russian forces, a rocket attack hit inhabited houses on Friday evening, causing death. of a woman who was in her garden and injuring her husband, a neighbor told an AFP journalist on Saturday morning, showing the damage caused to buildings in the neighborhood.

According to the governor of the Donetsk region, Pavlo Kyrylenko, four civilians have been killed and 12 injured in Sloviansk since Friday morning.

Sloviansk has been suffering day and night rocket fire for at least a week, hitting residential areas.

Responding to Ukrainian requests for additional weapons, the Pentagon on Friday announced $820 million in new military aid for Kyiv, including up to 150,000 155mm shells, new missiles for multiple rocket launchers American Himars, which recently arrived on the battlefield, as well as NASAMS air defense systems (American-Norwegian-made), capable of firing short and medium range surface-to-air missiles.

Norway announced for its part aid in the form of a donation of some 960 million euros, which could in particular enable Kyiv to buy weapons.

Faced with the maritime blockade imposed on it by Russia and which prevents it from exporting its wheat, Ukraine asked Turkey on Friday to intercept a Russian cargo ship leaving from the port of Berdiansk, in the occupied zone, and which it suspects to transport thousands of tons of grain stolen by Moscow.

As if to illustrate the issue of the grain war imposed by Moscow on Kyiv and which worries many African countries dependent on Ukrainian wheat for their food security, the Ukrainian army affirmed Friday evening, video in support, that the he Russian army had twice bombarded Serpents' Island with phosphorus bombs, an islet in the Black Sea near the Ukrainian and Romanian coasts and essential for controlling maritime traffic, from which Moscow had assured the day before that it had withdrawn in ” a sign of good will”.

Kyiv claims that the Russians were driven out by repeated Ukrainian strikes.

On the diplomatic front, the President of the European Commission Ursula von der Leyen, addressing the Kyiv parliament by video on Friday, called on it to speed up its anti-corruption reforms, as part of Ukraine's EU candidacy accepted in late June by the leaders of Twenty- Sept.

She also welcomed the passing of a law v ist to combat “the excessive influence of the oligarchs on the economy” and called for the adoption of a “law on the media, which brings Ukrainian legislation into line with European Union standards”.