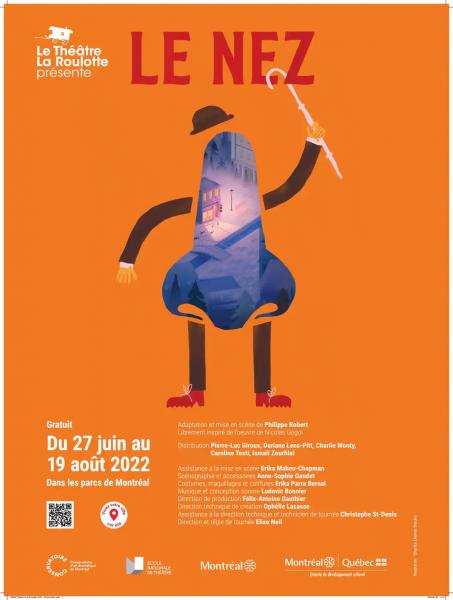 Théâtre La Roulotte, which is celebrating its 70th anniversary of creation, is back for 50 free performances offered in Montreal parks, from the 27 June to August 19.

This is the second production that Mr. Robert has signed and directed for the Théâtre La Roulotte, after Le rêve de Monsieur Paul – L'autre histoire de la Roulotte last year.

In The Nose,we are interested in Professor Monsieur Pierre, who “discovers when he wakes up that his nose has disappeared! Panicked, he immediately embarks on a frantic quest through the city to find him. With the help of a mischievous young girl named Anna, he will try by all means to make his way through the absurd cogs of a society that is beyond him. Who are we in the eyes of others? Who are we beyond this gaze? These are the questions that this surreal fable tackles, in a wacky and touching way”, we detailed in the synopsis guide.

Laurier Park, in the Plateau-Mont-Royal borough, is where the Théâtre La Roulotte tour kicks off on Monday, June 27 from 7 p.m. to 8 p.m. In all, 39 green spaces in the city will host the troop. Some 25,000 young and old are expected to attend the various performances.

La Roulotte, which has existed since 1953, has made more than a million young people laugh, think and dream to date, often introducing them to performing arts for the very first time.

More information is available on the Facebook page of Théâtre La Roulotte.