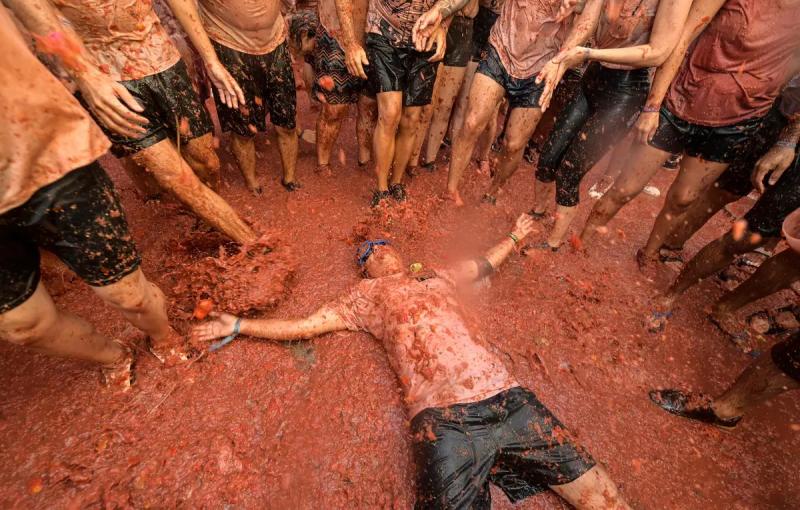 'La Tomatina', the famous tomato fight that attracts thousands of tourists to the town of Buñol (eastern Spain), made a comeback on Wednesday after a two-year absence due to the pandemic.

Some 15,000 people took part in this battle, with 130 tons of (very) ripe tomatoes as ammunition, according to figures provided by the town hall.

A few minutes after kick-off, the city was colored red, like the clothes of the participants who are traditionally dressed in white.

Many of the participants wore sunglasses, swimming goggles or snorkeling masks to avoid splashing in their eyes from tomatoes being unloaded from trucks or thrown by participants from the backs of vehicles.

“We go to 'la Tomatina' because it's the craziest thing that exists”, explained Patricio, a Mexican tourist on local television A Punt.

“We had I really want to find our beloved party again, to be able to throw tomatoes at us again and release all the adrenaline accumulated over the past two years,” María Vallés, in charge of tourism in this town of 9,500 inhabitants, told the press.

The battle, which lasts an hour, is followed by a party that lasts until the evening.

The “Tomatina” attracts curious people from all over the world, but this year the 20,000 tickets have not sold out.

A drop in attendance attributed, according to María Vallés, to the health restrictions remaining in force in some countries.

The origin of the party goes back to a dispute occurred during the town festival in 1945 and which ended with a fight over tomatoes found on the stall of a greengrocer.

Since then, there has been no shortage of critics denouncing food waste .

“Many people think that we throw away food”, defends María Vallés, “but it is a tomato grown on purpose for the Tomatina. If the Tomatina didn't take place, we wouldn't plant it.”

“Thanks to the Tomatina, many farmers will experience a better winter,” she concludes, referring to the orders that the municipality is placing with them in anticipation of the event.